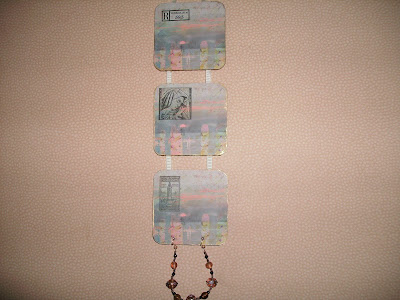 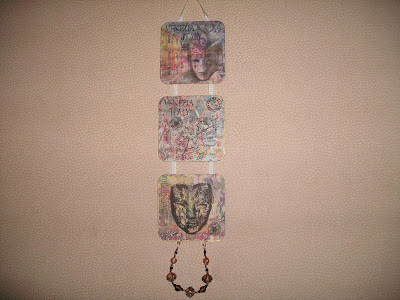 My friend, Ann, asked a little while ago if I fancied doing a swap with her. For the first one we did, I made a carousel, with horses dancing around gold poles, which I called Fairground Attraction. She made me a beautiful Diorama, which was what got me started on making them myself. This time she suggested coasters, and when I said I had been collecting them in pubs she said, 'oh, I could have sent you some blank ones if I'd known'. So she has now kindly done that so I will be able to ink them up and be more creative than with the beery ones. She made me a coaster book Post It holder, which is hanging above my craft desk to use for masking. She's now confirmed she's received my coaster wall hanging so it's ok to upload it now. I kept it quite plain, partly because of trying to become more minimalist, but mainly because I loved the Crafty Individuals Travels in Italy papers so much that I didn't want to cover them up too much. I used some Venetian glass beads I have been hanging onto for the right project. (one photo is the front, and the other is the plainer back view).
Posted by Lucy Edmondson at 10:31