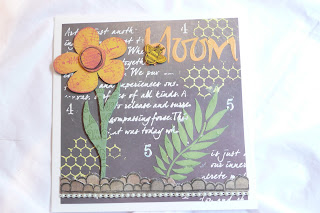 I made this card to go with the presents for Mum's wonderful carer. I used a background of Chatsworth paper and stencilled Grungepaste through the Art Is stencil and the new Hot Picks numbers stencil, then mixed some with Brusho in Lemon through a Crafters Workshop hexagon stencil and the mixture from before through the leaf stencil ELB 002 and grungepaste with Brusho in Orange through the JoFY Bloom stencil. I painted some of the Eclectica chipboard pieces and used stamps from the two new JoFY French sets 35 and 36. I finished off by stamping the scallop from JoFY35 twice onto some of the Chatsworth I still have left that I transferred onto canvas and used it to trim the bottom of the card, with a row of flat backed pearls.

I am entering this into the PaperArtsy stencil challenge.
Posted by Lucy Edmondson at 21:25 11 comments: 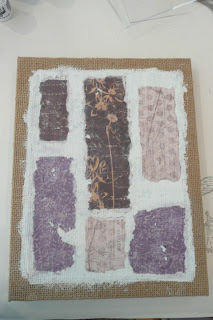 Over on PaperArtsy the challenge theme is Stencils which is great fun! I used a hessian canvas which I covered with gesso and transferred some pieces of Thorndon Hall using the gel medium transfer method so it looked like the picture above. When I was at the Craft Barn demo day a few weeks ago I bought some Brushos. I was desperate to try them but of course they had to sit acclimatizing in my craft room for a little while! I thought it would be great to try mixing them with Grungepaste as the colours looked so vibrant and, being dry, I thought they would keep the paste firm. I really liked the way you get a strong colour rather than a pastel colour from the white of the paste. I started off with Leaf Green for the leaf spray from the ELB002 stencil but I didn't like this colour at all! Really bright! So I added loads of colours in desperation and in the end added some Brown. I also used an Art Is stencil with Snowflake paint for a bit of script background. I used the two sizes of flower from the ELB003 stencil with Grungepaste and two shades on them, some Purple and some Scarlet. Then I used Brown for the Secret Garden from ELB004. 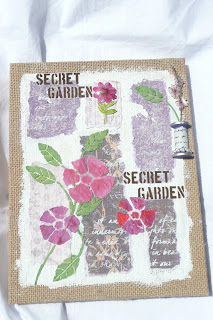 I finished off with some JoFy stamps on shrink plastic in matching colours and a flatbacked cotton reel - love these!

This canvas is going to be a little extra present for a very special person who has a birthday on Sunday; my wonderful dear friend and sister of my heart who looks after my mum.

I am entering this into the PaperArtsy stencils challenge, and Countryview Challenges June Challenge which is Shabby Chice.
Posted by Lucy Edmondson at 13:29 8 comments:


On the PaperArtsy blog the theme is 'Hidden Things'. This really inspired me and I have loads of ideas but not enough time! The idea I would have done for their blog if I hadn't done the Russian nesting dolls was a vintage compact. You know how they used to have a hidden section which clicked open, to keep the powder puff separate from the powder. I thought that would be perfect for a little hidden image once I had got rid of all the powder and stuff, and it could then be a handbag mirror, with a vintage feel. 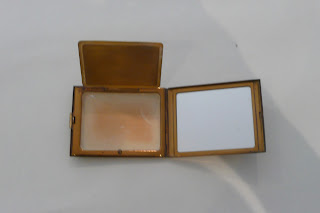 Here are some photos of the brass compact I bought on ebay which is extremely tarnished. 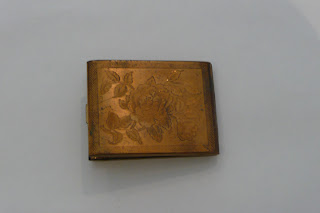 The front has a pretty rose design but you can hardly make it out so I sat in the garden and spent half an hour rubbing it with Treasure Gold in Brass. 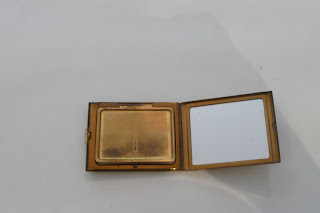 This is the front of the compact after the Treasure Gold treatment. 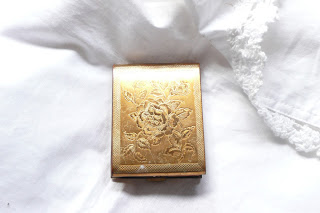 Under the hidden flap is one of the beautiful Liz Borer designs. I embossed it onto cardstock painted with Nougat and then painted it with Frescos. Then I covered the whole thing with Glossy Accents. I am entering this into the PaperArtsy challenge 'Hidden Things'. 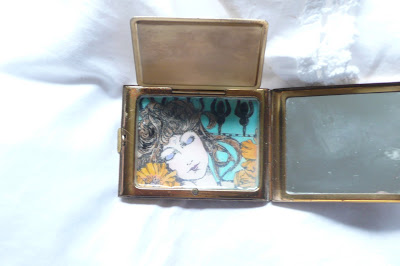 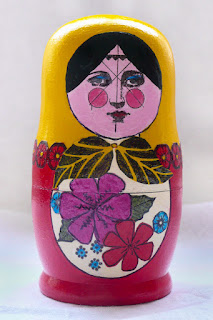 Over on the PaperArtsy Blog I am very pleased to show you my take on the theme of 'Hidden Things' which is the current challenge. Leandra did an amazing introduction to the challenge which you can see here. I was a bit worried when I read it though as I my first thought when I had seen the theme some weeks ago was 'ah, Russian nesting dolls!'. So when I read the post I thought, 'oh, just me then!'. So I hope even if it is just the way my mind works, and I have gone off into a weird tangent of wooden peasant dolls hiding inside each other, you will humour me and enjoy these brightly coloured glossy little folk creatures!

When I did my research on Google images I found that there were all kinds of nesting dolls that were still quite traditional, for instances some had five dolls, some seven, some ten; some are scaled down versions of the same image; some are not even the same gender; some depict fairy tales; some are of political figures. There are also Japanese ones called Kokeshi, which look a bit different, with a different shaped main body. I decided to stick to the iconic peasant woman with the round face and the head scarf, for the simple reason that I wanted you to be able to recognize it for what I intended it to be, rather than think, what the heck has she made!! Now that I have struggled with my design, it all looks really simple, but I found it really difficult because I wanted to use stamps which would enable each doll to be a scaled down version of the one before. Once I'd done the one for PaperArtsy I thought, ok I'll do a no pressure one for my own blog now and do a Kokeshi, just as a variation. So here it is:- 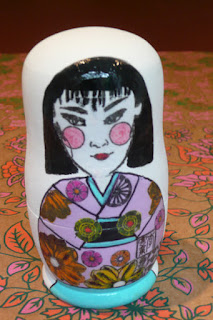 I used Lynne Perrella again, and the Asian Plate 4, and some terrible hand drawing. Here they are, all in a row:- 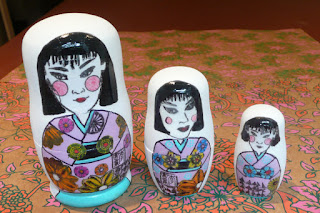 I do hope you will enter the hidden things challenge. As always it's a wonderful prize!
Posted by Lucy Edmondson at 19:00 4 comments:

A Bottle of Tango for PaperArtsy Bottles Challenge 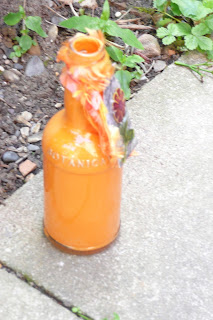 I wanted to make something to have a go at painting the inside of bottles because it looks so lovely with the glossy outside when I've seen it done. I really enjoyed Emma's post here and that inspired me to try it. I used Tango Fresco Finish. I then made a little tag with shrink plastic Lin Brown flowers and one of her text stamps, on a piece of the canvas transferred Chatsworth I still have left.

I am entering this into the bottles challenge here. 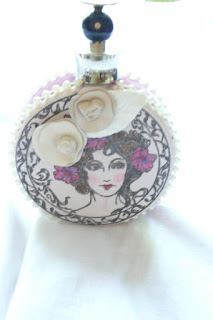 Just a very simple make today to join in the PaperArtsy Bottles challenge and which I also thought would fit the bill for the Country View Crafts Challenge which is Shabby Chic. I recently bought my first set of Liz Borer stamps from PaperArtsy and they are such beautiful images! My friend, Elaine, had given me this Valentina empty perfume bottle to decorate. She doesn't craft and often gives me things she thinks would be useful which is very imaginative for a non-crafter:- 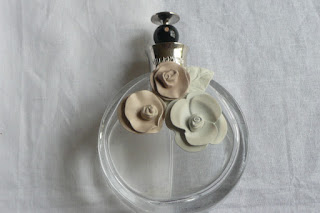 It was serendipity that the circular image on the plate of stamps exactly fit, so I stamped it on tissue and painted it with Fresco paints. Unfortunately though, one of the flowers obscured her eyes so I had to cut it off. For the back, I cut away the woman's image completely, and just cut out and applied some of the flowers:- 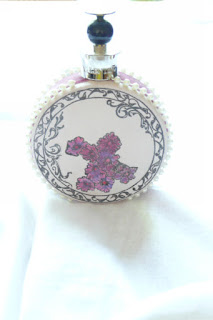