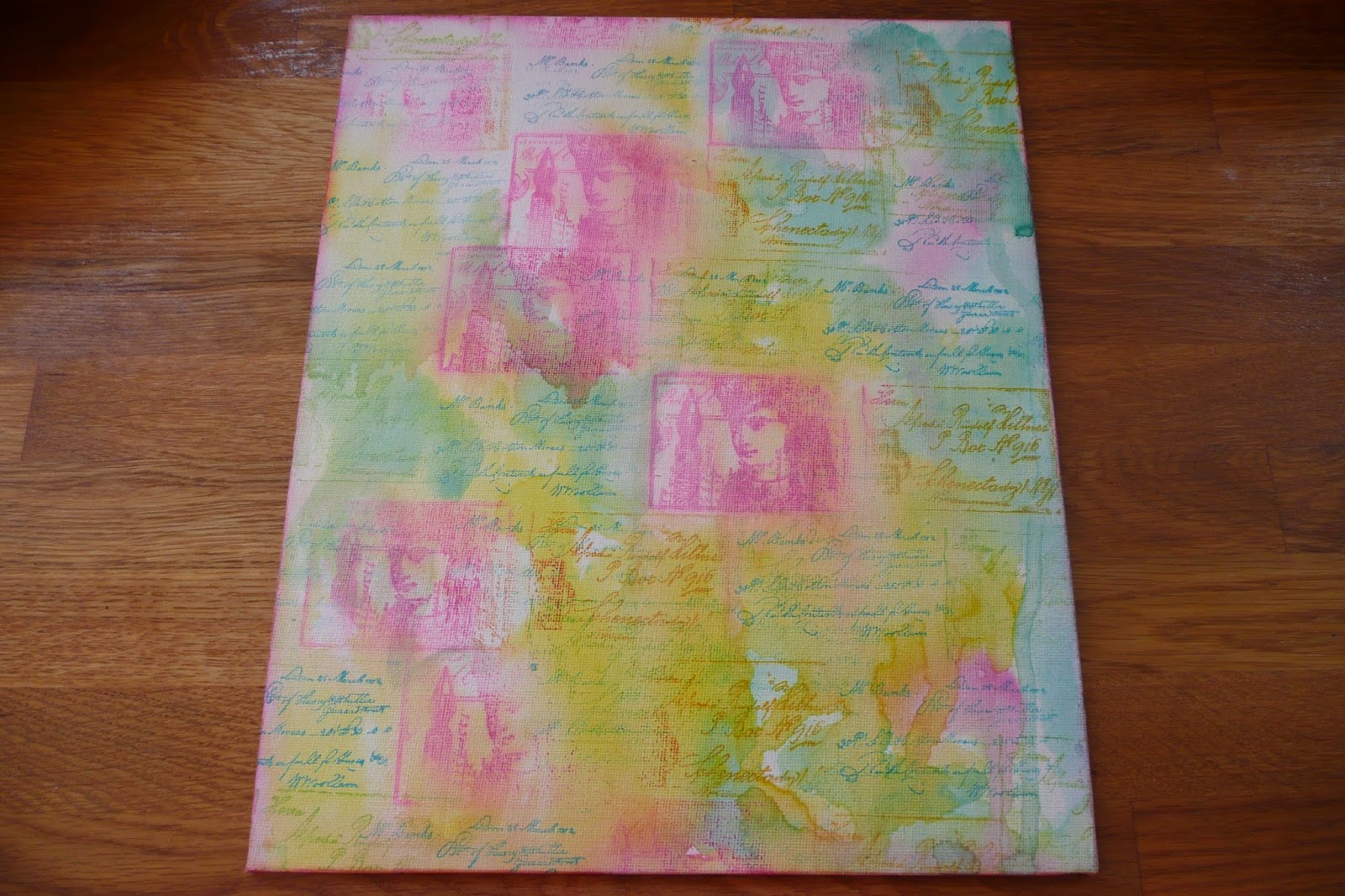 One of my favourite people ever has been on the Paper Artsy blog this week, Helen Chilton. Helen said her piece had been a Dog's Dinner at one point, and above I have shown mine at the Dog's Dinner stage! If it hadn't been for Helen I would have given up as I think it really takes an artist to get past this point and I find it very hard to recover things from this stage. I normally just make things worse. I really admire people who can see what is needed to redeem a piece or even turn a mess to their advantage.

Helen was absolutely right that the stencilling 'turned the corner' of the piece. It's been a bit of a rush as Helen was up on Friday, so very late in the week for the Sunday 5 pm deadline, and I'd already decided to make the Keren Baker piece. This was great fun though, and I'm again entering the Paper Artsy challenge. I am getting to be so last minute, Lin is going to start teasing me instead of the other way round! 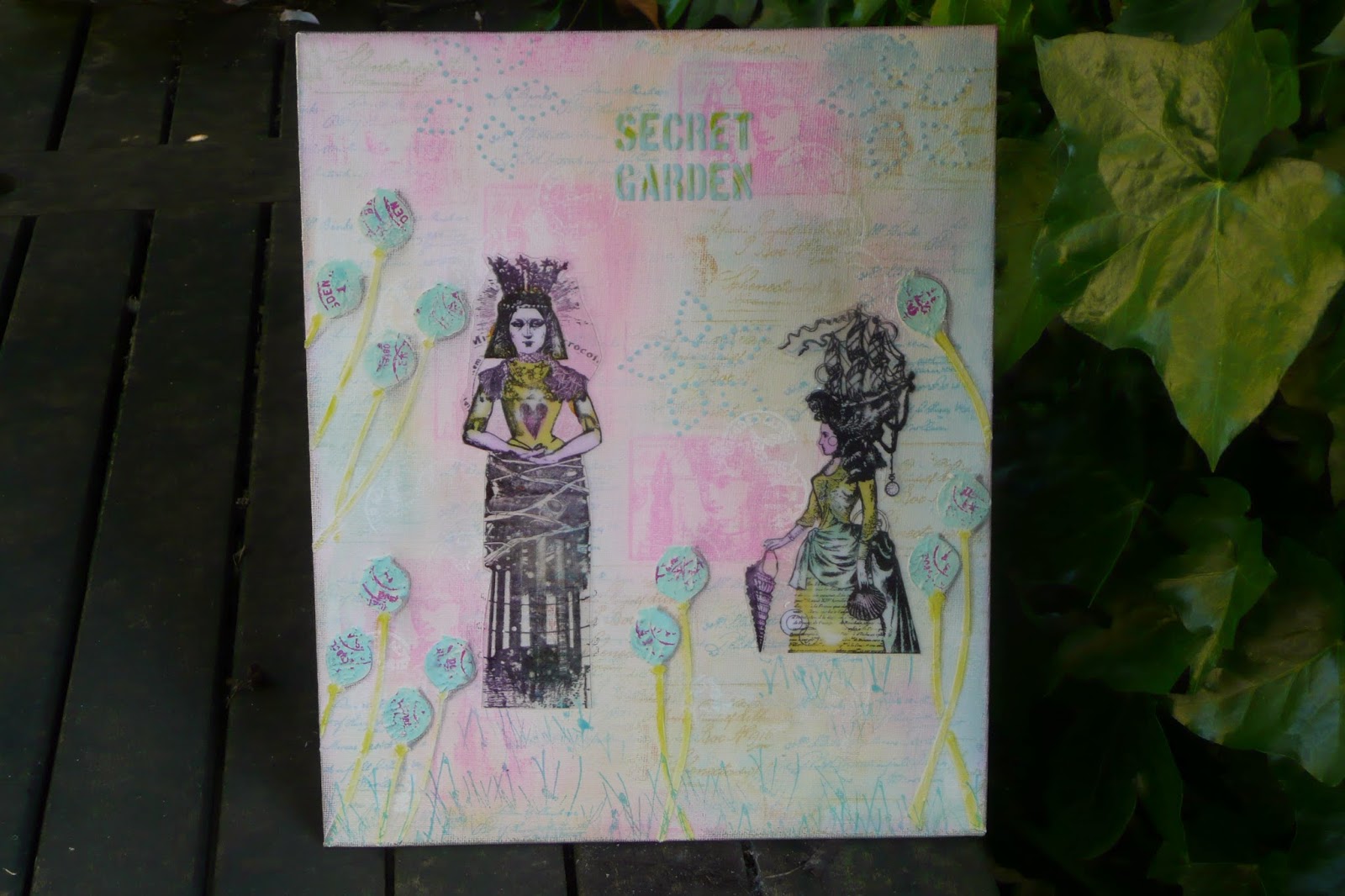 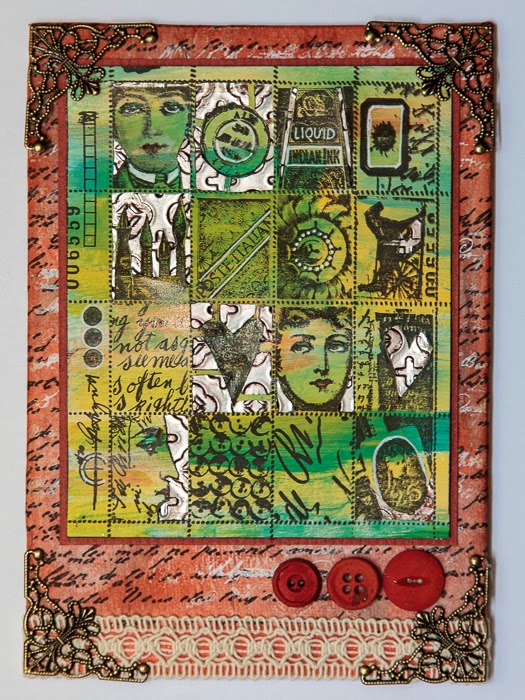 This week has seen a new Guest Designer on Paper Artsy, a delightful artist called Keren Baker. She calls her style Clean and Simple which as you know, is not normally me, but I feel she is very experimental and imaginative for what I normally associate with this style. I think she really complements the other designers in the Paper Artsy band and I loved everything she made this week. I decided to try my hand at cutting away pieces of the Lynne Perrella collage from LP 030 and you can see how she did it here.

I had intended to use the same frame as Keren as we happened to be going to Ikea the following day but they were £6! When I looked back at the blog post I saw Keren had recycled hers. Sensible girl! So I bought a couple of plastic ones which were a two pack for £2.75. I got into difficulties as I did the same effect she did, but it peeled away on the plastic. This led me to cover the frames which was a very happy accident, results of which I will show you on another day. So I decided to use a postcard size canvas panel. I painted it with Smoked Paprika and stamped it with Mini 62 in Snowflake. I painted a piece of cardstock in shapes of blues, yellows, oranges and stamped the collage and did the cutting away. The wait wasn't too long in A and E fortunately. When we got back I tried out various colours behind the panel and then decided to go with metallic. I embossed a piece of Paper Artsy metal and rubbed it with a bit of alcohol ink. I added a little bit of white gel pen detail.

To finish off I added some lace, some photo corners, and some of the painted buttons I had left over from my button roof!

I am entering this week's Paper Artsy challenge. 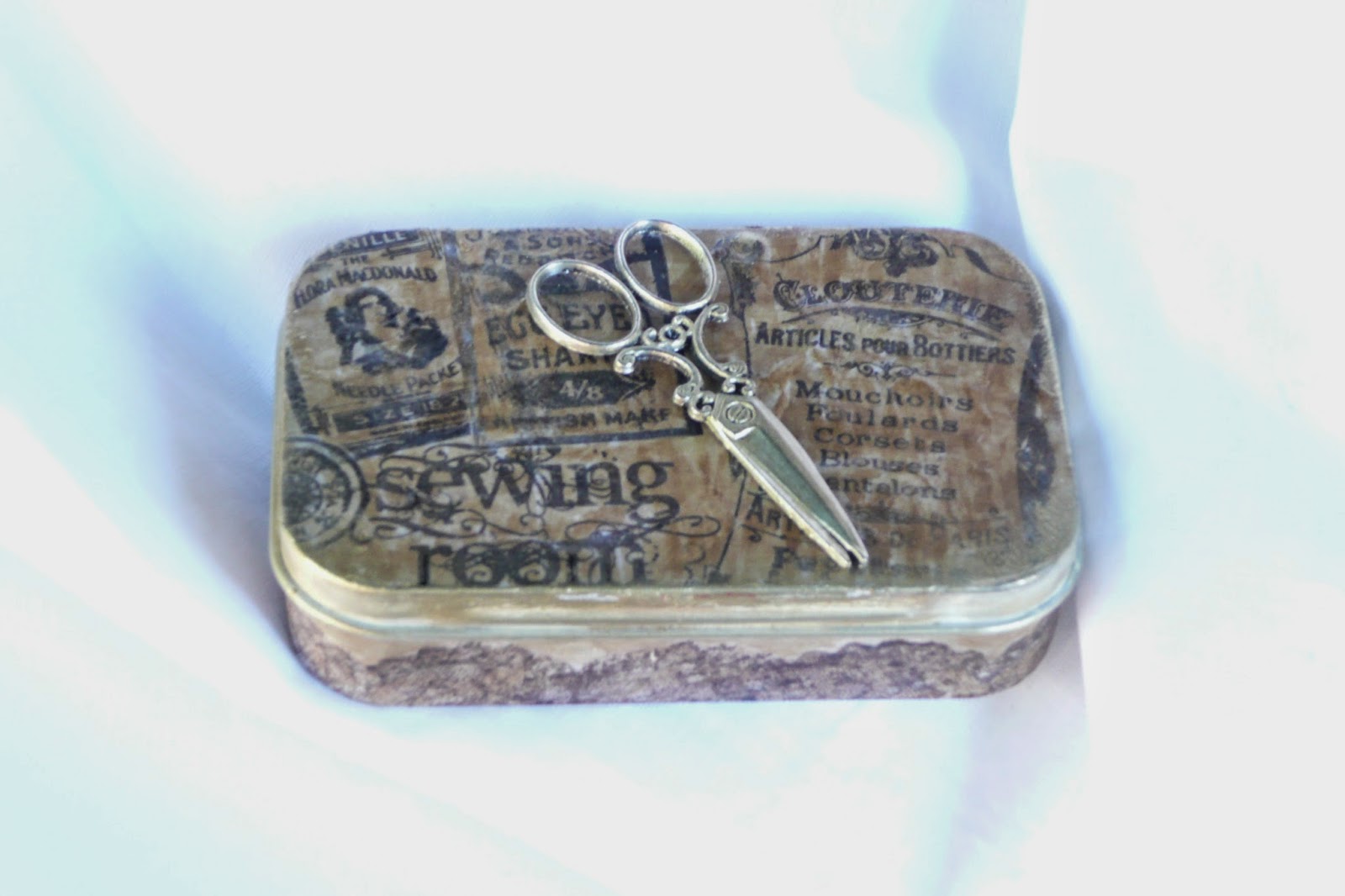 It's been such a fun week over on Paper Artsy! We have had the start of a new semester, so we didn't know who would be Guest Designer, and I was delighted when Liesbeth Fidder popped up as I have long admired her magazine work. We have also had some gorgeous designs from Ellen, Joanne, and Sara. I always love their work, and Sara did an amazing technique using stamped tissue over photographs to make a journal cover, which was so effective. I think if Twitter is anything to go by, it was Liesbeth throwing tins in the fire that stole the show though, and there was a lot of fun with everyone joining in and setting light to things! I would really love to do this if I had an open fire as it looked like a great way to remove the background from a tin and also produce some wonderful colours in the metal. Some of my Twitter buddies saw strange shapes appearing, such as bearded men and Meercats with corks on their heads. What can I say?

I have a rather sad little offering, this little tin, as it seemed rude not to join in. I did a collage of lots of Paper Artsy sewing stamps on a mint tin and used Brass Treasure Gold round the edges and on the scissor charm. I can use it to keep my needles and pins in. Thank you Liesbeth for giving us such fun and I am still hoping to throw some tins in my brother's fire next time I am over there.

Thank you so much for all the kind comments on the Paper Artsy blog and on Twitter for my own appearance over there this week. When I did my clay flowers and altered bottle piece back in February it was lovely to have everyone's support but this time, having so many people grasp the nettle and join in, has been so exciting. To have someone find a technique I have suggested useful is such a joy. Thank you.
Posted by Lucy Edmondson at 16:47 19 comments: 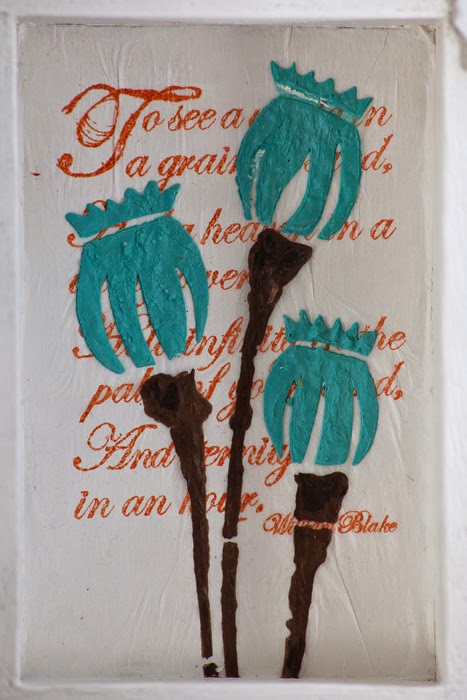 I am so excited that it is me again over on the Paper Artsy Blog! I would love you to pop over there and see the technique I have done and what I have made. Even more than that I would love it if you are inspired to have a go and make something. I hope Paper Artsy regulars are not too 'burnt out' already this week though!

There are two sneak peek photos here which don't really give anything away on their own, but they are close ups which I didn't have room for on the main post so you might like to refer back afterwards for the detail. Thank you so much for looking! 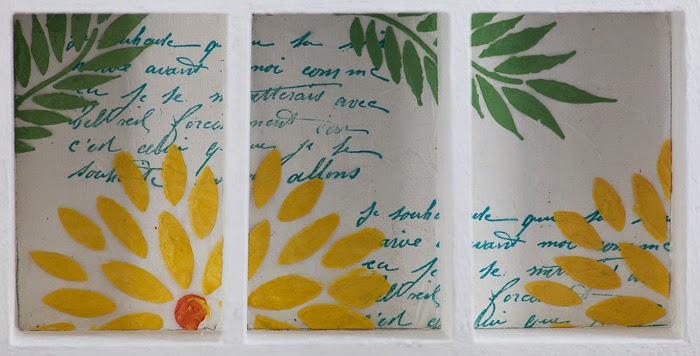 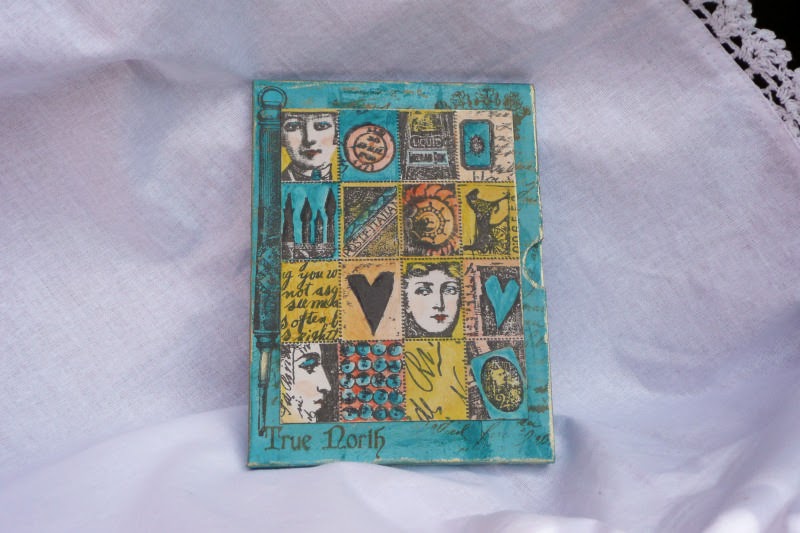 It's been a particularly exciting week over on the Paper Artsy blog this past week as it has been the turn of the amazing talent within the Paper Artsy follower community. Names were drawn out of a hat for those who wanted to work with the most recent releases of products, divided into product groups. I was tempted every single night by one of the incredible makes, but in the end decided to make a slide mailer, one of my favourite things, inspired by the one made by Carol Plume. Carol did a great job using gorgeous Lynne Perrella stamps, with loads of texture and a wonderful technique to highlight the images with hexagons. I loved it! 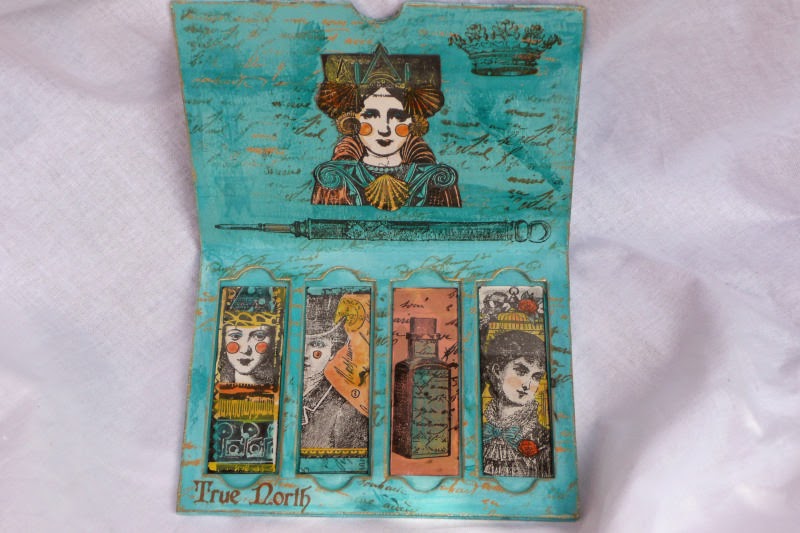 I am entering this week's challenge draw. Huge congratulations to all the lovely and talented friends, both old and new, who have contributed to this wonderful week.
Posted by Lucy Edmondson at 12:40 14 comments: