I've made this plaque for the Artistic Outpost anything goes Referral Programme for November using the little girl from the Think and Wonder plate. I stamped her onto shrink plastic which I cut with the Tim Holtz arch die and then filled in the edges with the floral border from the Flapper Fashions plate and coloured it with Pro Markers. I painted the plaque with various green shades of Fresco Finish, giving a mottled effect. 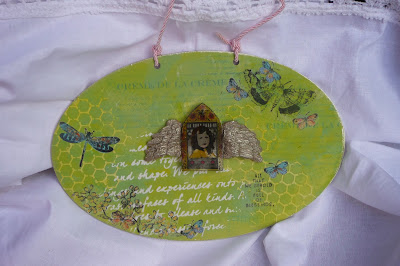 I used some grunge paste through the Mini Art Is stencil and then mixed some with the Fresco paint and spread it through the Mini Chicken Wire. I stamped the plaque with text from French Flight and Flower Market in shades of green and blue Archival ink, and then the flowers and butterflies from Flower Market in Black. I filled in with the mesh from Whimsical Musings. I made some clay wings to go behind the shrink plastic arch and highlighted them with Treasure Gold in Ice Fire.

To finish off I edged the plaque with Ice Fire and added some pink hanging cord.

You can get Artistic Outpost stamps from them here
Posted by Lucy Edmondson at 23:26 10 comments: 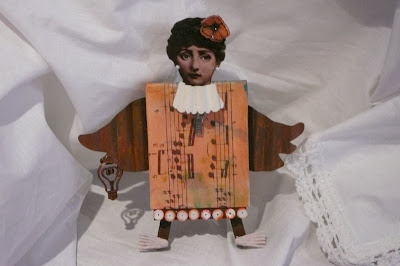 I hope you will share with me my exciting news! I am absolutely thrilled to be joining the design team for Snazzys scrapbooking and stamping design studio in Swindon, which also has an on-line shop. It is the perfect opportunity for me and I am so excited. Congratulations too, to my new teamies Diane and Claire, and to the lovely Minxy who is staying on.

My introduction is over on the site and I would love it if you said Hello to me over there. We were asked to pick a favourite item we had made in the past as an example of our work. I chose the tin man which I made a long time ago now but still like. It is not a very 'stampy' project but it was fun and reflects my love of using things that I have lying around and upcycling them. The original project is here. 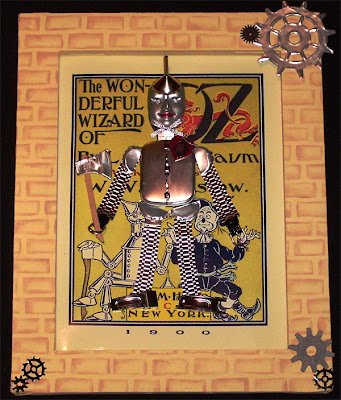 I am really looking forward to making my first projects for Snazzys!
Posted by Lucy Edmondson at 09:00 19 comments: 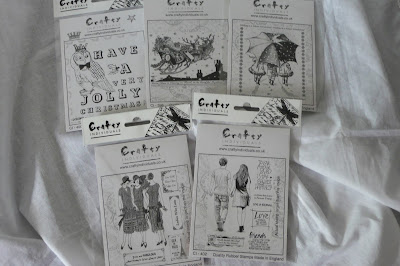 Crafty Individuals have just released five gorgeous new stamp plates! The top three are Christmas although the girls under the umbrella could be used without the greeting at any time of the year and I think will be a favourite. I am crazy about that Alice Palace owl though! The bottom two are perfect for friendship and the flappers will co-ordinate with the previously released flappers if you already have any from that range. The one on the right says, 'To Love and be Loved is the Greatest Happiness'. That's my belief.

You can get the new stamps from here.
Posted by Lucy Edmondson at 09:53 3 comments: 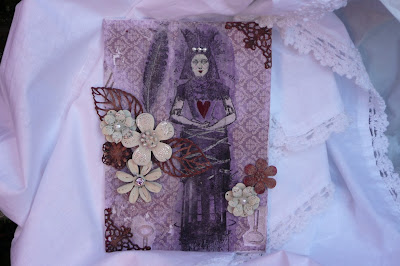 I didn't have very much time this week but I wanted to make something for the Paper Artsy challenge as the lovely Alison (butterfly) has been Guest Designer. She made an amazing house with lots of layers of paint, stencils, and stamping, and I particularly wanted to try the rusted metal flowers. Alison used rusting powder but she also recommended a combination of Blood Orange, Cinnamon, and Brown Shed Frescos so I used these on some metal flowers from a Primark necklace and some leaf charms and photo corners. I added a sprinkling of Vintage Photo Distress Embossing Powder for the textured aspect of rust, which works well. I did as Alison suggested and painted some of the flowers with Vanilla and then sanded back to the rusty paint.

To save time I wanted to use a substrate I had already prepared. A few weeks ago you may remember I was transferring Thorndon Hall papers onto canvas using Fresco Satin Glaze so I used one of these. I wanted to use the new Lynne Perella stamps I had chosen from winning the draw last week. Thank you Leandra! I painted the lady with Frescos and then added a feather from the same set, LP 007. Such a gorgeous set!

I am entering this week's challenge which is here.
Posted by Lucy Edmondson at 09:41 14 comments: 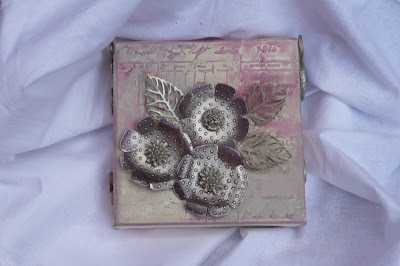 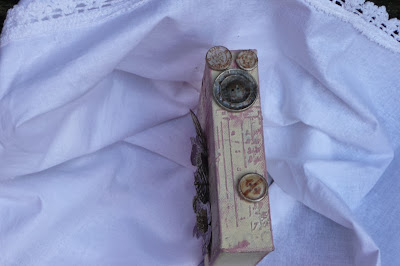 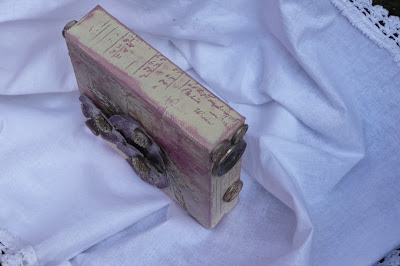 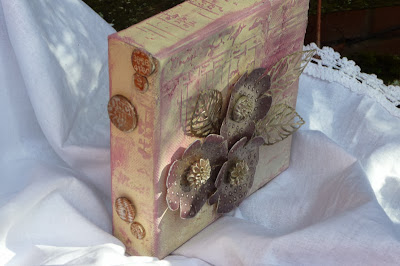