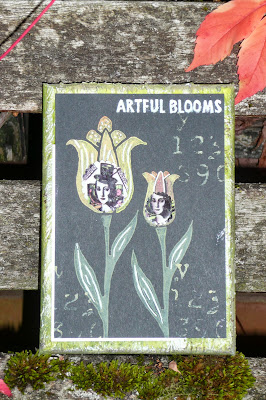 On the Paper Artsy blog this week it's been the turn of Liz Borer to be Guest Designer, and Oh! her projects have been glorious! Liz's sense of colour is wonderful and apparently the Bora Bora Fresco Paint which is one of my favourites was named after her. I believe the legend is she mixed this colour at a Paper Artsy class she attended and became known for it. She made the most beautiful frame covered in hand-stamped fabric with a Lynne Perella image in the middle - gorgeous! In this post here she made shrink plastic buttons to use in fabric or dressmaking themed makes, or any project really, and of course I loved them! A few weeks ago I had made a batch of shrink plastic pieces using Paper Artsy images and as I didn't have much time this week (in fact I didn't think I would join in until this morning) I thought I would use them. They don't have holes in to make them into buttons but this is definitely something I am going to do; in fact I would like to add them to some of my clothes. Thanks Liz!!

For the canvas I rolled grunge paste on with a brayer which we were taught to do in a previous blog post (all the tips and techniques are starting to build up now; it's like being on a course!).  I then painted it with Frescos, adding some touches of Metallic Glaze which has quite a pearly white quality which lightened it a bit. I stamped the canvas with script from Lynne Perella 014 in Coffee Archival.

I stamped Lin Brown Eclectica tulips onto black card with Frescos and highlighted with white gel pen and stamped Artful Blooms in Snowflake. I stamped with the Words and Numbers plate around the edge. I then made the shrink plastic pieces with the Teacup Lady from Lynne Perella LP014, with a little of the script Mini 26 around the edge of the larger piece as a fill-in, and cut them with scallop circle dies.

I hope I will have a bit more time to play next week as this week and last's were quickies! I am entering the challenge which you will find here.

Over on Paper Artsy this week it's been the turn of Joanne Wardle as Guest Designer, who has a beautifully elegant clean and simple style which is deceptively hard to emulate. I have been going stir-crazy with my crafting, or lack of it, as I was in France until last night so I missed Alison Butterfly's week of inspiration as Guest Designer and I am also an enormous fan of hers. So this week I have had plenty of time to plan what I was going to make whilst I was away, but almost no time to make something.

Before I show you my rather quick and basic card though, I thought you might like to hear my rubber stamping related story of my journey home, which wouldn't have been funny were it not for the fact that it's completely true, and also the sort of stupid thing I do. While I was in France I had been trying in vain to get my crafting fix by stamping up some mixed greetings and sentiments ready to put onto cards, and I grabbed some blank notecards I keep next to the computer for writing reminders and messages on, and stamped off onto them each time I changed my ink colour. A few days later I was looking on-line for the train times for the last leg of my journey home and I grabbed one of these notecards. I turned it over, wrote the departure times down, tucked it inside my passport, then put it into my carry-on bag so I wouldn't forget it. Well of course I then did forget. So I handed my passport over to the customs officer, and inside he had a little card, in alternating green and fuchsia ink, which read:-

Honestly, you couldn't make it up!

So, this is my rather rushed card for this week's Paper Artsy challenge:- 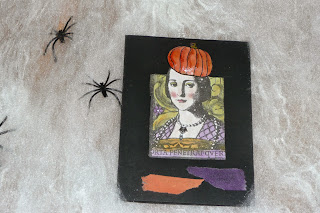 I wanted to stick with Joanne's Hallowe'en theme but I didn't have any Paper Artsy Hallowe'en stamps so I thought, I know, Lynne Perella stamps are characterized by women with unusual headresses, so why not a pumpkin for a hat! I chose the lady with the teacup on her head from LP014 and made a pumpkin from shrink plastic and fresco Butternut and Smoked Paprika and Green Olives, as Joanne had been using shrink plastic this week. I embossed it before shrinking with clear embossing powder. I coloured the image with distress inks and used greens, purples, and orange as I think of these as Hallowe'en colours.

Joanne had made some wonderful streaks of Fresco paint on her cards and I knew I would mess up if I tried to do an artful brushstroke. Early one of the guest designer had made washi tape so I thought I would paint some microporous tape:- 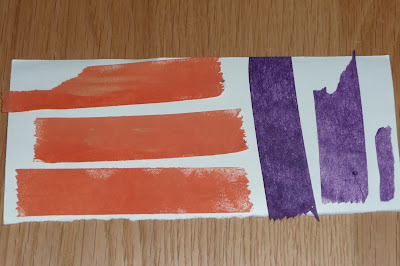 It was lucky I had put it back in the medicine cabinet rather than in my craft room otherwise I would never have found it! I coloured some with Eggplant for a gothic purple, and some with Pumpkin mixed with Smoked Paprika and then some streaks of Pumpkin added on afterwards. This meant I could tear off some strips however I wanted it to look. This is something I will definitely try again.

Sorry it has been a bit of a rushed make and it's a shame I haven't had a bit more time as I have had loads of ideas this week!! Hoping to meet some lovely Paper Artsy friends tomorrow!!
Posted by Lucy Edmondson at 23:06 16 comments: 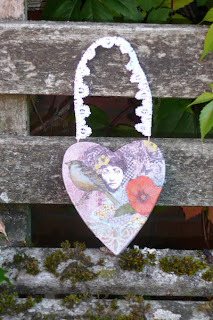 I've made this papier mache heart for the Indigo Blu 'Shabby Chic' challenge. I collaged together images from Live, Laugh, Love, the Poppies, and the Mr Darcy sets.

I painted the base with Paper Artsy Fresco Finish in Claret mixed with Rusty Rose for opacity, and then Crackle Glaze, then Mushroom. I painted the images with Frescos.

I stitched the lace to the cord that was already on the hanging.

Just to let you know that there is a fabulous bloghop with amazing prizes to be won over at Eclectic Paperie to celebrate Kim's first anniversary as the new owner.

I had a wonderful month in August as Guest Designer and I am so sad not to be able to make an item to contribute to the bloghop due to holiday plans, but I shall be hopping away!

I am absolutely delighted that Kim is now stocking Crafty Individuals' stamps so that those of you in the US can get your hands on them more easily. Kim must have been up all night deciding which of the enormous range she was going to stock, and I think she has done a great job! You will just love the selection she has chosen - some old, some new!

Hope you will join the hop. I'm off to do just that!
Posted by Lucy Edmondson at 13:16 4 comments: 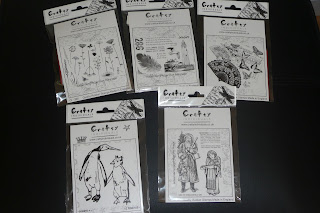 Crafty Individuals have brought out these gorgeous new stamps: tremendously varied! My favourites are the flowers on the top left which will be so useful and are so pretty and delicate, and the middle one with the lighthouse. But don't you just love those adorable cheeky penguins?! The collage stamp top right is typical of the beautiful vintage collage style which drew me to Crafty Individuals many years ago, and the stamp bottom right is the first, I think, Christmas release of this year.

I am always drawn to lighthouses and the decor of our place in France has them dotted about, particularly in our bedroom where we have lamps shaped like lighthouses. It seems to be a bit of a French thing, or maybe just in Brittany. They also feature in much of Colin's photography so they are special to me for that reason too. I wanted to make a masculine card for my big brother, David's birthday on Friday and I mixed the new set of stamps with some of the older CI nautical stamp sets. It's a very, very simple card, just lots of images overlaid in different shades of ink, with the main image in black to make it stand out. Always feel very self-conscious when sending home-made cards to family! 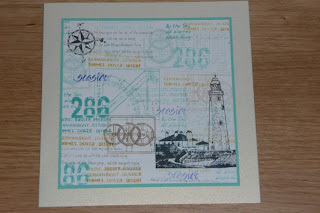 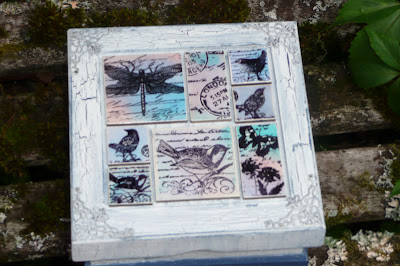 I have a little tutorial on Unruly Paper Arts for this Chinese style wooden box with glazed Stampbord tiles. I have used Crafty Individuals' stamps with a bird theme for the tiles.
Posted by Lucy Edmondson at 12:21 16 comments: 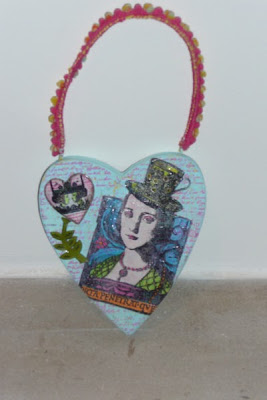 Another amazing week on the Paper Artsy blog and Darcy has launched some fabulous new stamps in the Eclectica range! I have made a papier mache heart using Lynne Perella stamps inspired by Helen Chilton's post which you can see here, and am entering it for the challenge here. 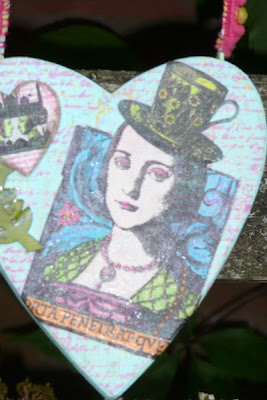 I followed Helen's advice and painted the heart with Snowflake first so that when I painted the Limelight it would be a strong colour, then added the crackle, then thick brush strokes of Bora Bora. I used the script from LP 014 in Magenta Hue Archival and the Mini 26 which echos the script at the bottom of the teacup lady, also from LP 014. I covered her with Fresco Gloss Glaze which Leandra advised a while back in her video to bring out the colours. 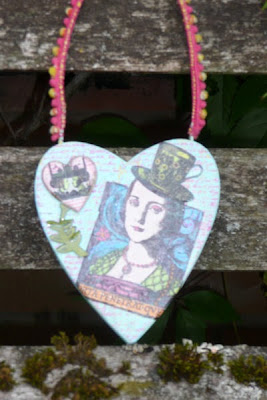 I made a shrink plastic heart from LP 015, using the script to fill in the blank edges, taking inspiration from Carol Quance's charm bracelet a few weeks ago (love how all the tips start to come together). It was an afterthought to turn it into a flower by adding a shrink plastic stem from Lin Brown's Eclectica. The finishing touch was to stitch some of the funky bobble trim that was in my Monster Monday box to the cord, which I thought went well with the neon colours I had used.

I would just like to say on here, huge congratulations to the Paper Artsy followers who are having their amazing work showcased on the PA blog at the moment. I thoroughly enjoyed looking at their projects last night. Just as much fun as seeing the talented Guest Designers.
Posted by Lucy Edmondson at 09:42 8 comments: