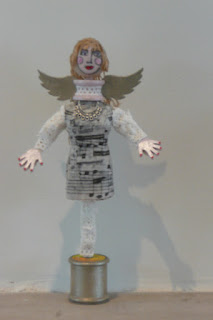 I have had such fun this week making Art Dolls! It's the current theme on PaperArtsy and is one of my favourite things! I love that they can be anything you want them to be. I have a few in the pipeline on my desk, but I don't know what I will get finished. The hardest aspect I find is the engineering, as it needs a bit of planning to make sure they are going to be sturdy if you want something that will stand up on its own. I'm not very good at construction. 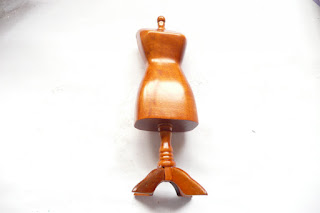 I started off with this lovely quality wooden mannequin which is part of the dolls house furniture range from the Sue Ryder charity shops. I wanted it for one of my other dolls so on this occasion I used it to make a papier mache base. It's good to get double-duty out of something. 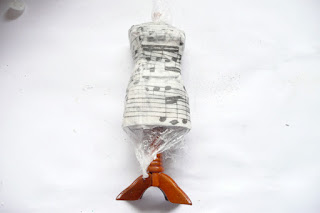 I wrapped it in clingfilm and then used Tim Holtz Composer tissue wrap and gel medium for the papier mache. When it had dried I cut in a straight line up the back, which was really easy, and slipped off well. You can glue the edges back together after you have stuffed it (I used wadding) or you can make a feature of it by doing corset-style lacing. I made a false base for it by drawing around the bottom onto card then cutting it out slightly larger and snipping into it and gluing the snipped bits.
However, before I did all of this, I took a coffee stirrer, the ones you get in the coffee shop are the perfect length, and pushed it up the middle so it was held in place and came out at the neck of the 'dress' and out of the bottom base card. 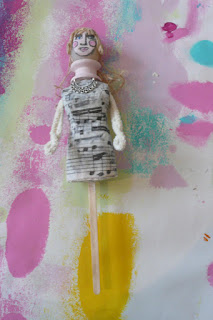 I rolled a ball of translucent oven bake fimo and inked up a Lynne Perrella stamp and pressed it into the face. I found if you get any of the stamp you don't want, you can wipe it away with a baby wipe at this stage. I then pushed a coffee stirrer part way into the ball of clay at the neck and pulled it out again to make it easier to glue later and then baked it. Thinking about things in advance is the bit I have trouble with but otherwise glueing a ball onto a stick is going to be tricky!

Oh whoops, sorry meant to say, you also need to do the pipe cleaners before you stuff and glue the body. I used two cream ones and folded them in half, made a hole in the papier mache and pushed the folded end through to the front, adjusted the length, and twisted and folded and glued down inside until they were secured. I then twisted the ends into a hand shape and I really liked the arms at this stage and wondered about leaving them, which is why I ended up taking process photos.

The neck is one of the half spools PaperArtsy sell at the shows, which I have painted in Blush Fresco. The necklace is actually a joining piece for jewellery making, a connector. Not sure I like it though. Col thought the neck looked like she had whiplash, so I added a bit of lace to make it more feminine. It added a lot of stability though as it held lots of the components together. Once I'd taken the fimo out of the oven and cooled it, I painted the face and pushed it onto the end of the coffee stick with Golden matte medium and let it set up overnight, so it was really solid. 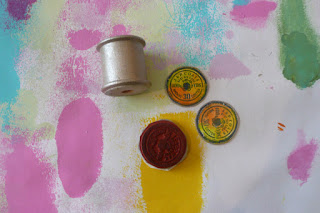 Next job, something for her to stand on. I had a very old wooden cotton reel in my sewing basket and I painted it with the new Fresco White Fire. OMG this is gorgeous! I decided not to cover it up on the sides as it was so lush, but for the top and bottom I stamped the spool from Hot Picks HP1211 and washed over a bit of Limelight, Tango, and Banana translucents and glued these on. I stuck the coffee stirrer through with the Golden Medium again, which is really strong, and covered the rest of the pogo stick with adhesive lace. 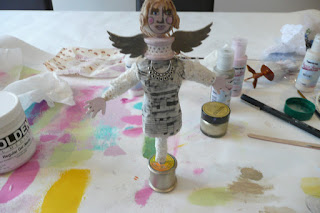 OK where have I got to? Right, I decided to cover the arms with the adhesive lace too. I bought some hand buttons at the Farnborough Make It show which my friend, Jean, spotted for me and they are just perfect! I painted them with Blush, followed by some Pearl Glaze, and then my dolly asked if she could have her nails painted too, so what could be a better shade than London Bus! The pipecleaners were quite a strong base to glue them on to.

Ahem, now the hair! Well, this was just hemp and I cut some rough lengths and glued them on and also coiled some round by her ears. A bit of a bad hair day I'm afraid. As I was going along, I ran my dirty paint brushes through it so she has some highlights of White Fire and Nougat. I was a bit worried that at this stage she would have to hop to the hairdressers so I thought I had better give her some wings, although this will only make her hair more flyaway. So I gave her some fairy grungepaper wings with White Fire paint. And just for her, a touch of matching Treasure Gold. Because You're Worth It. 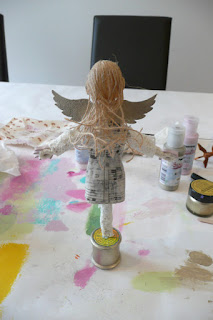 Here's her wild hair while I was working on her! She can fly to the hairdressers now.

I finished off the back with some tiny blue buttons. 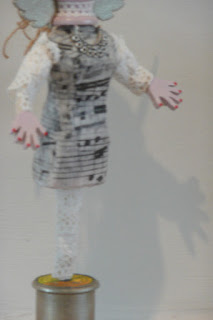 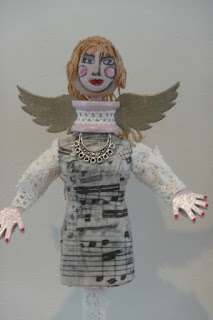 A shot of her face which I tweaked a bit. The cotton reel helped a lot with holding the body parts together as the coffee stirrer lodged in the centre of the spool. 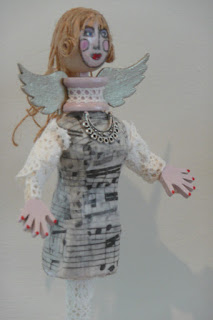 I am entering this into the PaperArtsy Art Dolls challenge. There's still another week and a couple of days to go so I hope there will be lots of entries as I'm dying to see!
Posted by Lucy Edmondson at 12:33