Thought you might like to see a few more of the Christmas cards I have been making. 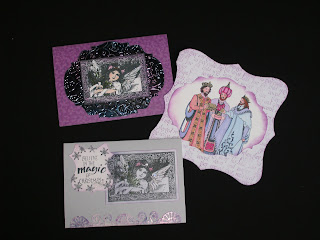 For the little angel from Crafty Individuals, top left, I coloured her with Pro Markers and used a fine glitter on her wings, then made some faux metal and put it through an embossing folder and then the Alterations Baroque die. The Three Kings by Elusive Images, kindly lent to me by Alison, were also coloured with Pro Markers. For the little angel bottom left I alcohol-inked some card stock and cut the border strip with a Cuttlebug die. 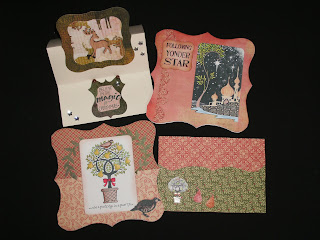 I made the Easel card using a wooden reindeer from the Altered Element and Nestie and Alterations dies. For the Elusive Images scene, kindly lent to me by Alison again, I used Pro Markers and cut off the greeting from the bottom, and used the Following Yonder Star from the Three Kings set, on an Alterations die. The edging on the left was again the Cuttlebug die.The card bottom left was made with the Crafty Individuals Partridge in a Pear Tree, coloured with Pro Markers and the edges corner-rounded and inked. The partridge bottom right of the card is from the Creative Expressions set. The card bottom right uses the same stamp sets but on shrink plastic, but I have used the remains of the paper cut from the edges of the bracket shaped card to make a pretty shape across the middle of the card. 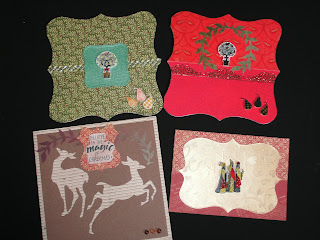 The top two cards are again the Pear Tree sets on shrink, and the one on the right has a border strip across the middle which was part of the lower piece of card used to cover the bracket shaped card, with another, co-ordinating, piece for the top half. For the card bottom left I used the waste card from cutting out some reindeer, i.e. the negative, and bottom right I have used the Three Kings, this time on shrink plastic.