I haven't blogged for a while so I thought I'd show you a little something whilst I'm finishing off some other items to go with it. I am really pleased with this Krafty Lady Frame Art Mould I bought when I went to the Stamp Bug a few weeks ago and have made up several already, for bigger projects. Set on the diagonal, it was the perfect size for a little papier mache box from the Altered Element:- 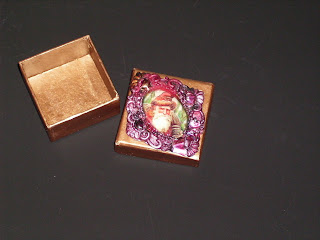 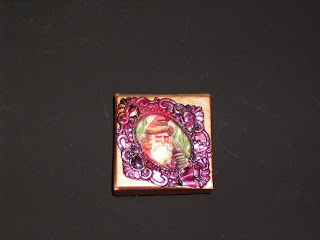 The image in the centre is from the new Crafty Individuals Christmas Miniatures book, which as usual is gorgeous, and I filled it in with glossy accents. I made up the frame with friendly plastic. I maybe haven't shown the mould in its best light as it is very detailed, but I have lost some of the detail as I wanted to use some little bits of Angelina Jolie film, which of course fuses rather than melts. I decided I liked the slightly grungy but very shimmery effect, though.
Posted by Lucy Edmondson at 11:51