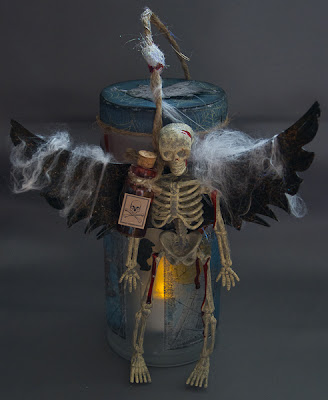 Today Gingersnap Creations launch another Hallowe'en challenge theme - Ravens. I only have one Hallowe'en stamp and that is the spooky recently released raven in a churchyard with a full moon one from Crafty Individuals, which is CI 319. I had in mind I wanted to make an inexpensive lantern from a jam jar or similar, that children could take round the houses with them when they go Trick or Treating, or that you could have lit in the porch to show that you welcome Trick or Treaters and have candy! It would also work for parties in the garden. 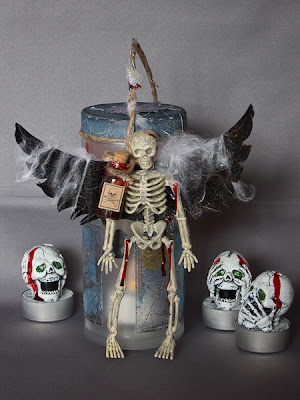 I stamped the images twice on tissue paper and once on card and coloured them. I applied the tissue paper ones to the jar, which was an empty bath foam bottle which was perfect for the purpose, and cut the raven from the card one. I covered the lid with spiders web paper and added the card raven. I bought some skellingtons from Poundland and gave one to Brenda, she gave me the spiders webbing, and we split the pack of skull candles which we got at the car boot sale on Sunday - isn't it great to have friends you can share a cup of sugar or a skellington with?!

I filled a little bottle with blood (red Crystal Lacquer) for the skellington to clutch, and dribbled some everywhere! I gave him some black grungeboard wings to make him look like a really scary cross between a raven and a skellington - imagine him flying over your head! Except he won't be flying anywhere as he has had a nasty bash on the head, followed by being hung in a noose just for good measure! I fashioned some string around the lid to make a handle, and tied some 'barbed wire' around it. I added some raven table sprinkles (thanks again Brenda!), and popped an LED tea light inside. I used the skull tea lights to pose the photo. I forgot to photograph the side with a skellington hand charm on it.

All just a bit of fun but could make a cheap lantern just for the Hallowe'en period.

I am entering this for the Happy Daze October challenge which is anything Christmas or Hallowe'en. 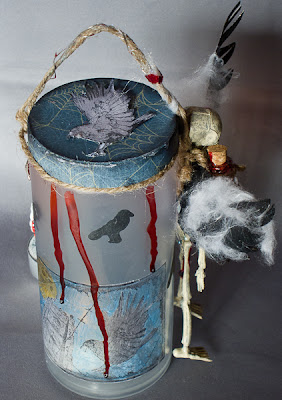 Had some good news on Friday - I won the Stamp Man challenge for the Greco Roman box I made. I have given it to Col and he likes it! That is even more of a challenge!
Posted by Lucy Edmondson at 06:01