Over on Gingersnaps today, they have launched a challenge to use punches.

This is my entry:- 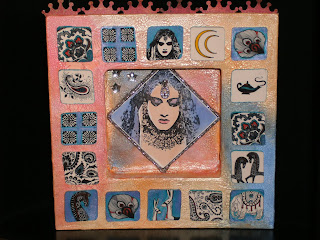 The punches I have used are square and corner rounders for the shrink plastic tiles around the edge, and a crown punch for the border along the top. I don't use punches very much anymore as I tend to use my Cuttlebug - I guess a lot of us would say that, so that's why it is set as a challenge!

I hope you won't mind that I have used Sheherazade as my main image again. I felt she fitted with the Ancient Ages focus of the month but to be absolutely honest, I bought this gorgeous stamp set a few months ago and have resisted touching it as I was saving it for this opportunity, so I am going mad over it now! I popped her on Stampbord this time. First of all I carefully dabbed the colours, coffee and mauve, where I felt her face and the rest of the image would fall, then did a bit of scratching back, and wrapped silver trim around the edge of the tile. Her forehead 'jewel' is actually a tiny piece of the silver paisley trim I used on the lantern last week. I added silver stars over her head, again to represent the 'thousand and one nights'.

The main part of the item is one of the deep papier mache frames you can get from the Artistic Stamper now. They are so useful (and good value!). I painted it with Crackle Paint and then rubbed in a range of Silkies colours from Imagination Crafts. They have a huge depth of colour and shimmer and are my current fave thing (and likely to remain so).

I must admit the crown border was an afterthought because I didn't think I'd been 'Punchy' enough and it was looking too much like the next challenge, the Inchies one! It was fiddly so I popped each tiny crown on sticky tape and then stuck them on. I am not sure this really added anything much to the piece. The other confession, as if that wasn't enough (!) was that I forgot that the frame had a right way up when I stuck the tiles on, as it has a hanging hole on the back and I completely messed up! So I would like to give it to one of my friends now but they would have to prop it up instead of hanging it, and it would be a reminder of my flaws!

The tiles were made by punching 2 ins square pieces of cream shrink plastic and rounded the corners. I used a selection of stamps from the Sheherazade set but also my Paisley Elephant set and a Basic Grey Moroccan set as I felt they had an Arabian Nights feel to them (in my mind, anyway!). I stamped with StazOn and then used non-alcohol based permanent markers. After I had shrunk them I used purple and blue Silkies as my background colour.
Posted by Lucy Edmondson at 10:55