I've been a little quiet on my blog lately as I have been working on various items for blogging in September. I mentioned a few months ago that I had been given the great honour of being chosen as September Muse for Gingersnap Creations Blogspot, which is a US challenge blog. And now at last, September is here! They are interviewing me on Saturday 4 September and interspersing it with some photos they are choosing from my blog - don't know what they will choose, so that is an added excitement! Then I will have two tutorials, one on 6 September and one on 17 September. Obviously I would be thrilled to bits if you have a look when the time comes, I will need all the support I can get!

I have been asked to join in as many of the challenges as I can manage, starting with one today which is Ancient Ages. I decided to depict the tale of Sheherazade, (I think there are lots of different spellings so I have gone for the one on the rubber stamp). This was the tale of the Persian King, who, having been betrayed by his first wife, took his revenge by killing all his wives after one night together. Sheherazade was a beautiful and very learned girl, who had studied poetry, philosopy, and history. On the first night, she told the Sultan a wonderful tale, and as dawn broke he was desperate to hear the end of the story, but our heroine said that it would have to wait for the next night, so she was given a reprieve. This continued for a thousand and one nights, during which time he became bewitched by her, and she bore him three sons, and became his Sultana.

The card was made by cutting an onion shaped card blank, then sponging Silkies through a stencil called Small Kasbah, both from Imagination Crafts. I added the image of Sheherazade, and then her name on tissue paper so the background could show through. 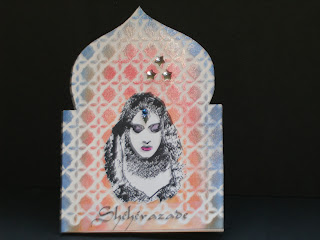 I also used tissue paper directly onto the glass of the lantern, and added an onion shaped paisley rubber stamped shrink plastic tag, coloured with pencils, and some paisley silver braid. I then decorated the candle with her face, again on tissue paper, and added stars around her to represent the Thousand and One Nights. I gave her a bit of make-up and some jewels on her forehead in each example.

It was very difficult to photograph as I wanted the lantern to be lit, and for the light to shine through her face. I made several failed attempts and this was the best I could manage, but I quite like the effect of just having her beautiful down-turned eyes showing: it looks quite sultry.
Posted by Lucy Edmondson at 05:00