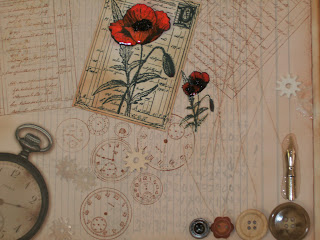 When I saw that the Gingersnaps Colour Challenge was for neutral colours plus one bold, at first I thought it would be easy, but then the ideas wouldn't come. So I thought to myself, what is my favourite bold colour - Red. What does Red say to me, and I thought Poppies! I have this lovely poppy stamp on a ledger background from Crafty Individuals, and had just bought a piece of Tim Holtz Distressables paper with a ledger design, so that was then my starting point. I had planned on making a card but then realized that the paper was 9 ins x 9 ins, an unusual size, and I didn't want to cut into it, so I decided to make a wall hanging by cutting mountboard a tiny bit bigger. Having said all of that, I am very disappointed with my photos because I was fairly pleased with how the hanging turned out, but it doesn't look very good in the photos. 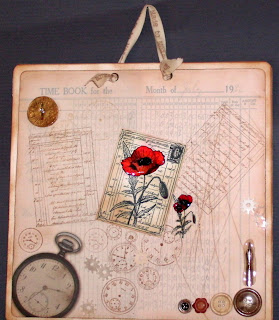 I rounded the corners on both the mountboard and the card and distressed the edges with my new Tonic distressing tool, scratched some lines on the paper, and inked all the edges and across onto the scratches to emphasize them, using Distress Ink in Vintage Photo, then adhered the paper to the mountboard. I added a plain Crafty Individuals ledger stamp in Vintage Photo and some of their clock faces. I stamped the poppy three times so I could decoupage the poppy head, which I then glazed with Glossy Accents and added black seed beads to the centre. I also had a tiny poppy stamp which I used in the same way, as an embellishment.

I added a clay art mould clock in gold, with brad legs for hands and an adhesive gem in the centre, top left of the design, and some neutral coloured buttons bottom right. I also added a pen nib and completely flooded it with Glossy Accents so it was set into it. I added some cogs made from the Tim Holtz die but on shrink plastic. To finish I punched some holes and added eyelets, and a piece of twill to hang it up with, with the words Made to Measure stamped on them, as I thought the ledger could be for an old fasshioned draper's shop, like the one my granddad had. I hope you like it and can see past the lousy photographs! Thanks for looking. 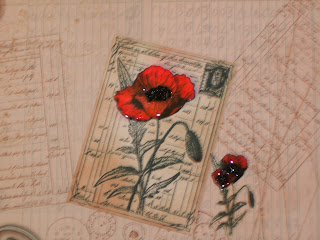