This week on the Paper Artsy blog it has been the turn of my favourite person ever, Helen Chilton, and I have been so inspired there haven't been enough hours in the day to do all the things I wanted. As it turned out, it took me all my time just doing the first project so the others will probably go into next week and future challenges. It was particularly lovely that it was Helen as we had had a good chat and I had watched her demo at the Craft Barn last Saturday. So here is my entry for this week's challenge.

Helen was doing 'Splatting' with Distress Stains on a wooden cube to make a memo block. This is the most seriously messy thing I have every tried, and believe me I am no stranger to mess! I had my  friend, Pauline, round to craft (and Yes, she loved the notebook and her other presents), and she is a clean crafter, and was also wearing a clean top - when she arrived! She was sitting a table width away from me but was not safe! I had a nice new Boden top on (I'm a bit vain, despite being messy). After a moment I realized I needed to make a bib out of kitchen towel and push my sleeves up. My arms looked like I had measles! Pauline got a direct hit! Such fun though! I had wondered before if Distress Stains were worth bothering with but the dabber tops do make this splatting fun possible. I nearly bought the Picked Raspberry at the Craft Barn - Helen, wish you had said this was coming up and I would have bought a few more!! 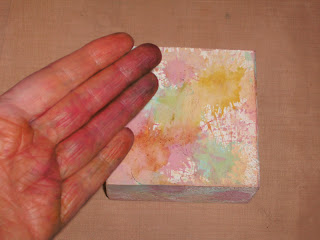 I was pleased though that I had some wooden blocks. Shameless showing off now, as my brother, John, who I totally adore, has been chosen to do Marks and Spencer's exhibit for the Chelsea Flower Show this year, and he is at the carpentry stage of construction at the moment so he said I could have as much as I wanted. So there will be lots of different sized wooden projects coming up! I have tried to stick as much as possible to Helen's design but I didn't have the Pierrot stamps (love 'em, though). I also couldn't think of any way to do the memo pin part, although I found the solution in The Range yesterday, after I had made and photographed this (cue another attempt and more wooden blocks next week .......). 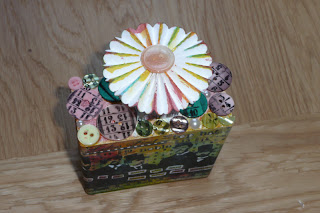 One of the lovely things with the Paper Artsy challenges is we are becoming a little community of commenters and entrants now and Helen advised about the white pen and Kezzy advised about the wire. My hubby, Colin, had put me off at the beginning of the week as he said I had to drill holes so I gave up very early on, on the idea of having wire coming out of the top. I had thought you could just poke something in, and it seems you can. Men are trying not to make themselves redundant (he would never be, as I keep him just for cuteness). 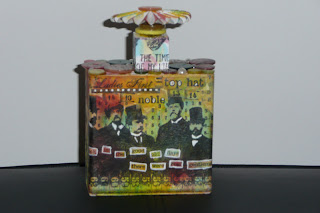 As you can see I stuck to Helen's design with the splats, the wooden block, the white pen, the rosette, and the stamped buttons. The whole button thing was fiddly. I pressed them down onto the inked stamps but they kept slipping away. Then it was surprisingly difficult to arrange them in a pleasing way.  I used some pearls to fill in odd gaps. Then I remembered I had a big bag of buttons but no idea where they were .......... 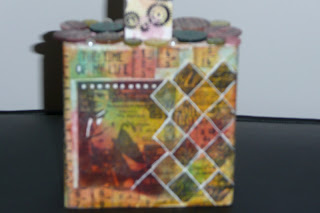 I struggled with the rosettes. I find it really difficult to flatten and glue them - am I alone? I added a little of the matching Distress Stain colours to tone everything in. I made four so I could decide what I wanted to do (I can use the others next week?). Bit annoyed with myself because I prepared the top one with a clock face and game spinner and it looked lovely and it was meant to go on top of the other one to add height, but the towering effect just wasn't right. So many things went wrong. So that is why it just has that quite plain button on the top, as that wasn't meant to be the top layer. 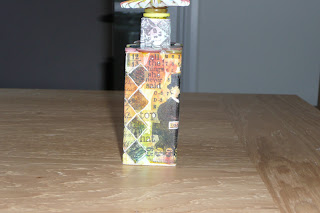 Some shots of the sides. I didn't really have enough Paper Artsy stamps to use although I hope to get some more at Ally Pally on Sunday. Yesterday I stamped some up at Brenda's (thank you so much, Brenda!), but I had already made this. 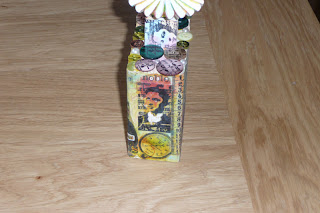 I'm not sure what I am going to use this for, since it is not a memo/photo holder like Helen's so it will probably go in the bin, but I really had such fun making it, and thank you so much for the inspiration and fun! Please Paper Artsy, bring her back regularly. A Helen is for Life, not just for Christmas! Now are you still with me? Please humour me. Hope you will take this in the spirit of sisterly love. My gorgeous brother, John, and his lovely wife, Nic, have one of their garden designs featured in this month's (May issue) of Home and Garden magazine. I am not into gardening but it is a stunning project and the photography is breathtaking: it glows off the page. It is a glasshouse where the garden extends from the house into the outdoors. It talks about John (who has always been the loveliest brother any girl could have) and gives a very timely mention of the show. If you are in a newsagent and you are into gardening, which I know a lot of crafters are, or even out of loyalty to me, I hope you will take a peek at the article, which is called 'Enclosed Order'.