I am entering this Steampunk Shadow Box for The Stamp Man Alcohol Inks Challenge which closes tonight. It's only the second time I have entered but I remembered being so influenced by The Stamp Man shows on Create and Craft when I first started crafting, and I have learnt such a lot from them. 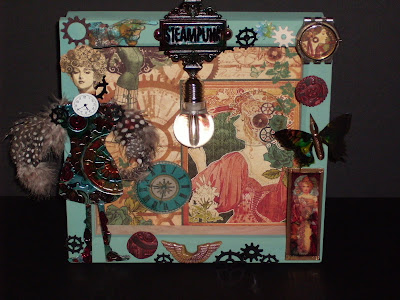 I painted the shadow box with a mix of Baltic Blue, Sky Blue, and Guacamole Fresco Finish paints to make a jade green to match the dominant colour in the Graphic 45 Steampunk Debutante papers, and used a piece of this paper as the backdrop. I cut a Tim Holtz Alterations Die mannequin out of roasting tin foil and embossed it with a Cogs embossing folder. I cut the stand off and then cut it in half lengthways then reattached it to make two legs. I alcohol inked it by dripping colour on so it was quite intense, and picking out the various colours from the background paper. I cut a couple of Bigz Flourishes as a base for my feather arms and added the head from the papers. I then added a pocket watch face at the neck and some shrink plastic cogs cut from the Alterations Die at the shoulders to pull the elements of the doll together.


On the backdrop there is a clock from Dezinaworld highlighted with a piece of curved glass, and I used another piece to highlight the woman's face, and added some more shrink plastic cogs. The lightbulb is a keyring and it does light up!


Bottom right I alcohol inked a microscope slide, concentrating the colour around the edge and placed the lady image behind it so that she was framed by AI colour but not concealed, and edged it with Memory Foil tape in Gold. The acetate butterfly was alcohol inked and I added a vintage pen nib. The cog above it has been made from a mould in clay, and then metallic rub on added to enhance the raised areas. Above that is a piece from a watch used to frame another image from the background paper book. To the left of this are some more shrink plastic cogs. I used a hand from the Tim Holtz steampunk stamp set to point to one of his ornate plates which has been alcohol inked, and the Steampunk word was taken from an Artistic Outpost steampunk set. I alcohol inked the word and the hand just so they weren't stark white and filled in the frame with Glossy Accents.

On the bottom of the frame are some more shrink plastic cogs, a different cog mould, and a mould I took of some wings which I then made up in clay. I would like to thank Petra for letting me stamp up some of her images last night, and Alison when she was here the other week, who also let me use the mannequin die. What good buddies!
Posted by Lucy Edmondson at 19:58