One of the fun things about the Altered Element DT is that Lynne finds us a charity shop item each month for us to alter. I may have mentioned before that I was so keen to be on this DT so I could challenge myself in this direction, as you never know what you will get. This month it was this set of melamine coasters. My immediate thought was to focus on the cork backing, which made me think of the cork notice board we have in our kitchen for notes and reminders. Because there were five of them, however, it also made me think of an open box with four sides and a base. So I decided to go for a memo holder to go by the 'phone so you could take a message and leave it for someone else in the house using a pin, clip, or magnet. My theme was then influenced by the remaining Artchix Playful Gents images, some of which I had used on the shadow box in the last post. Some of the images feature playing cards, and this made me think of the four suits. I had also been sent some gorgeous Metallic Cosmic Shimmer mica powders, so I wanted to include these too. 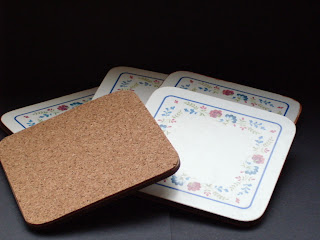 I started off by re-covering the tiles with cork paper, which my kind student, Jude, had sourced for me from Craft Island. I then stamped on each piece, with an inexpensive Card Suits stamp set I had. On Sunday I was at the Biggin Hill Sincerely Yours Show and when I spotted a pack of four Style Stones featuring the four suits, I thought these were ideal. (These were from the Imagination Crafts stall where I chatted to a lovely lady called Sue, who was doing a brilliant demo with Silkies, but that's a story for another day).

I covered the reverse of the coasters with cork paper and stamped the suits, and painted all the edges with bronze paint, by adding water to one of the Cosmic Shimmer powders. I then assembled the box using strong glue. 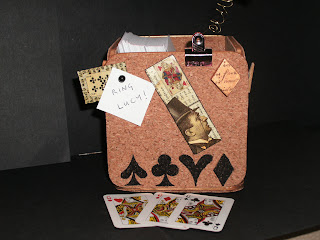 I cut out all the images which had a 'card' element, to decorate the box, using tiny clothes pegs and pins. I painted the Style Stones with the bronze paint and stamped them with an old script stamp, to further echo the background on some of the images. I adhered a different Style Stone 'suit' to each side of the box using a magnet, so they could be used to attach messages. I wanted to add a bit of interest to the shape of the box, rather than just a square, so I curled a piece of gold wire around a pencil, alcohol inked a bulldog clip and attached the wire to it, added two images stuck back to back on the end, and then clipped it to the edge of the box. 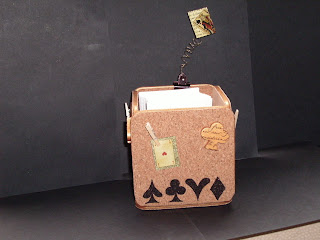 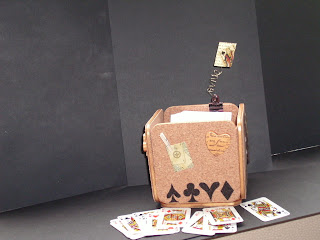 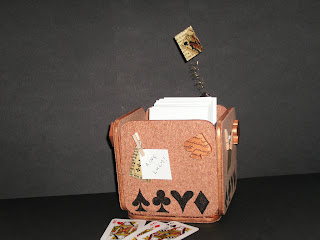 Finally, I added some notepaper to the inside of the box. I wasn't too sure if I liked this, but my students liked it today and have asked to make one next time.

The Cosmic Shimmers and the Artchix images can be obtained from the Altered Element.