What's the SP? A first attempt at Steam Punk

I thought I would have a little play around with some Steam Punk ideas but I am not sure I have properly got my head round this genre! The wooden frame is from Paper Artsy, and I painted it, then added Crackle Paint and Cosmic Shimmers, and dropped some silver EP into it whilst it was wet and heat gunned it, then added some metallic rub-ons and a little Distress Ink. I recently bought some Tim Holtz Sprockets and Gears and as they are a bit expensive, I thought I would use them as masks first, to create a background paper, before adhering them around the edge of the frame. I dabbed Distress Ink over them, and then sprayed the whole sheet with Cosmic Shimmers to blend the whole thing together and just get a shadow of the sprocket shapes (later in the day I realized Tim does sell these in the form of masks, and the new die, but wise after the event as usual!). I then added some tone on tone stamping to the background with images and words mainly from the Artistic Stamper Clocks and Keys Plate 1, which is such a versatile set. The tiny bits of gold hardware round and about are just the pins pulled out from the dominos, when I made the domino box. I just blobbed some Glossy Accents and then sprinkled them on.

The two Victorian lady images are cameo sheets from Debbi Moore, which I love. I punched circles from them and the larger one has been edged with black lace, which I ruched with a running stitch, and then added a pin with a pearl pushed on the end. The other image has been glued to a gold button, to create a frame, and I then covered both pieces with Glossy Accents. 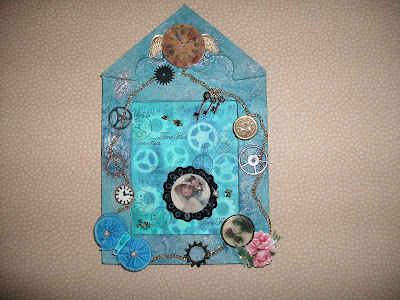 In the bottom right corner I have used a piece of Victorian Mamelok, which I embossed a little with an embossing stylus, and then added a touch of Stickles. Bottom left is a zip, which was white and I coloured with a permanent marker. I opened it out, and did a running stitch along both edges, so that it formed two coils, and then added a pearl to the centre. I made a shrink plastic clock with German Scrap wings at the top, and the hands were a piece of jewellery finding which was lurking on my work space, which I broke in half. I made some shrink plastic keys from the Clocks and Keys plate, and hung them from a piece of chain. I made a clock from Fimo and Cosmic Shimmer Gold, and another shrink plastic clock, and linked all the pieces together with the remainder of the chain and glued it down with strong glue.

Sorry for the lengthy explanation.
Posted by Lucy Edmondson at 18:56