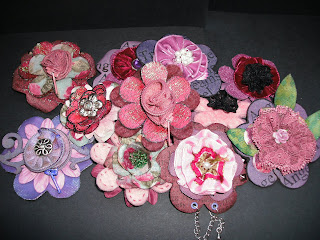 I decided to make some corsages having seen some very expensive ones on Winchester Christmas Market. I then saw some bags of suede scraps in a fabric shop which I thought would be perfect, but again, very expensive, so the idea went on the back-burner. Then, the other week I was inking up some grungepaper to make flowers and I thought how suedey the rough side is, especially when it has been roughed up a lot with plenty of ink application. The other idea I had in the back of my mind was that I had bought a glossy magazine recently (only for the free nail polish!), and it said that zips and studs on clothes were going to be 'on trend this season'. This fitted in with the look I wanted, as I didn't want to make the kind of corsages you buy for wedding outfits, not that there is anything wrong with them, but I wanted something a bit less conventional and more quirky, whilst still being pretty, that you could wear for everyday with jeans. I had Lynne in mind as a recipient for a corsage if they worked out ok, and she likes pretty and romantic, so I didn't want anything too grungy.
Here us some of the corsages individually:- 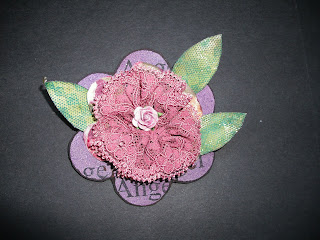 For this one I did a running stitch along a piece of lace and gathered it up. There is a floral fabric layer you can just see, stiffened with fabric stiffener, and some leaves made from canvas, with the Artistic Stamper Harlequin stamp on them, then the stamped grungeboard layer. 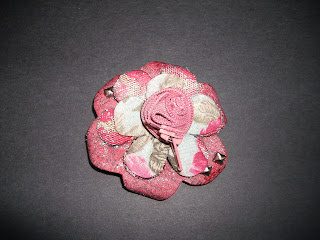 This one was made with a pink zip, with a running stitch to gather it up into a rose, and some studs on the grungepaper layer, another stiffened fabric layer, and some Stickles. 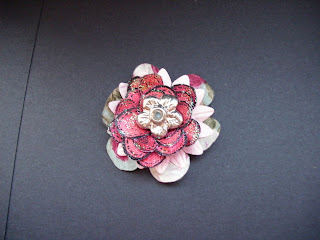 This one was layers of Stitchels stamped flowers on canvas, with a stiffened fabric layer, and a flower shaped button in the centre. I think I might add a grungepaper base layer to this, but I wanted you to see it as I think the Stitchels work so well for layered flowers, giving the edges definition. 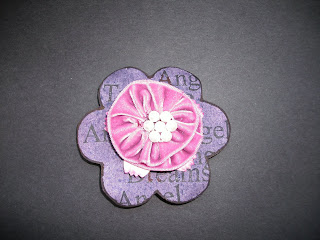 This was velvet ribbon, gathered up as before, with a running stitch. 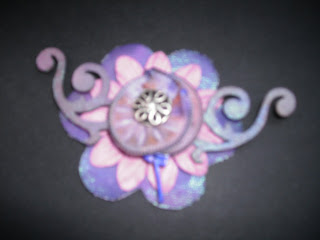 This one was a white zip, sprayed with purple glimmer mists, then the metal zipper coloured to match with Alcohol Inks, gathered up as before, then a button in the centre, a canvas layer, and a couple of the mini Maya Road Scrolls from the Artistic Stamper, sprayed with the same glimmer mists. When I ordered the skirt zips the shop probably thought I was a bit strange as they didn't have enough pink ones, so I said any colour would do, as I was going to ink them up! 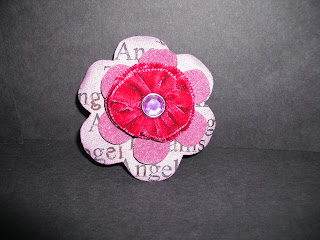 This one is velvet ribbon, a gem brad, and a layer of velvet paper, stuck back to back to give some substance and so it looked prettier from underneath. 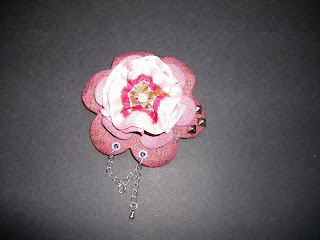 This one was a gathered ribbon centre again, with a pearl in the middle, two grungepaper layers, some studs, and a piece of chain. 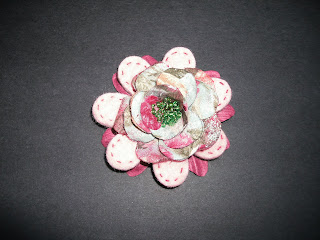 This one had some layers of stiffened fabric flowers, filled with accent beads in the centre. I had some very thick felt, and I felt the petals had more shape and definition with the edges pulled together with stab stitching.
Some of the flowers were cut from a template, some were stamped from the Flower Power set from the Artistic Stamper, and some were Stitchels.
I have stamped all the grungeboard bases on the reverse with a flourish, and sewn the brooch backs on for strength, and sewn the layers together where possible. 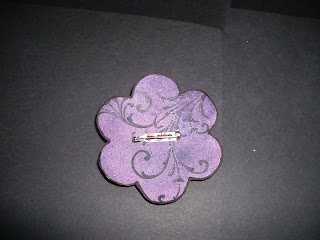 Sorry to be a bit boring, going through each one, but it was an experiment to do each one differently and then decide what worked. I hope you like them - if you do, which do you like best? I have a favourite, but I need to choose one for Lynne.
Posted by Lucy Edmondson at 12:35