Canvas Transfer Technique onto Chatsworth Paper - over on Paper Artsy!

I was delighted to be asked to show a technique over on the Paper Artsy blog where I've experimented with transferring Chatsworth paper onto canvas. I hope you will hop over there and see how I've done it and all the lovely products I've used and leave me a comment! Thank you so much! I've given a little bit more information below on how I made the two example projects and I will follow this up at a later date with some more things I've been making as there are so many ways in which you can use this technique. I made this sketch book and canvas:- 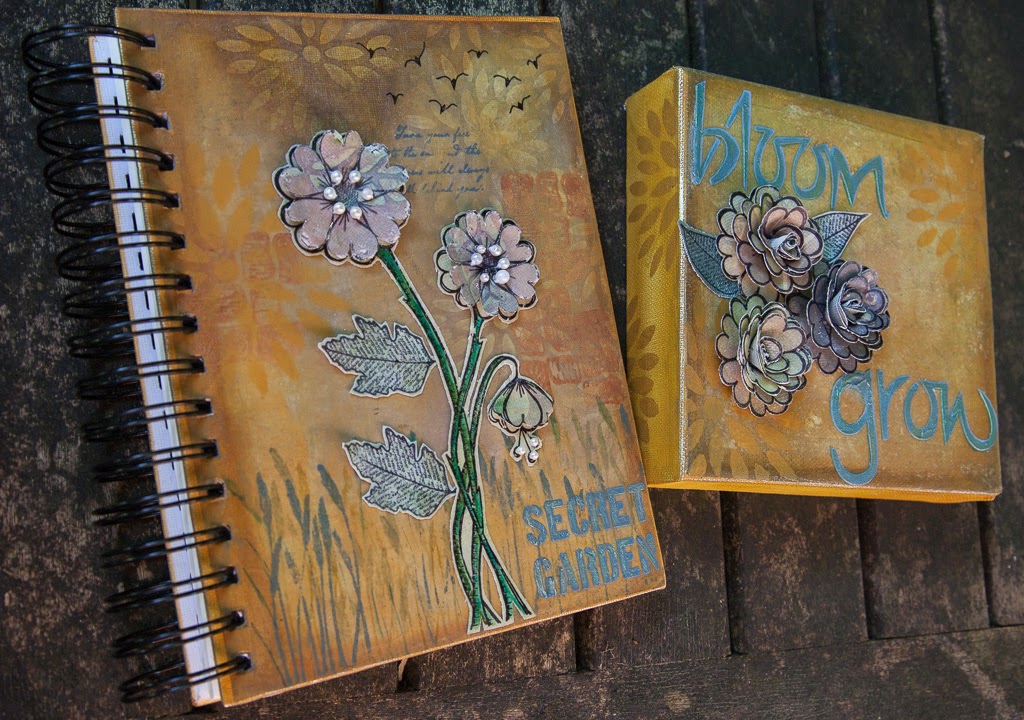 The sketch book is a Reeves A5 canvas covered spiral bound book which you can get from The Range or on-line. I popped it off the spiral binding to work on, and painted the edges with a mixture of Seaweed and Tikka Fresco Finish Paint. I then transferred the Chatsworth paper onto it using the method described in the Paper Artsy post. I used the design which features the flower which is like the design in the stencil PS005. I know you would think it is difficult to work around the spiral holes but actually it was easy to pop them out with my craft knife. 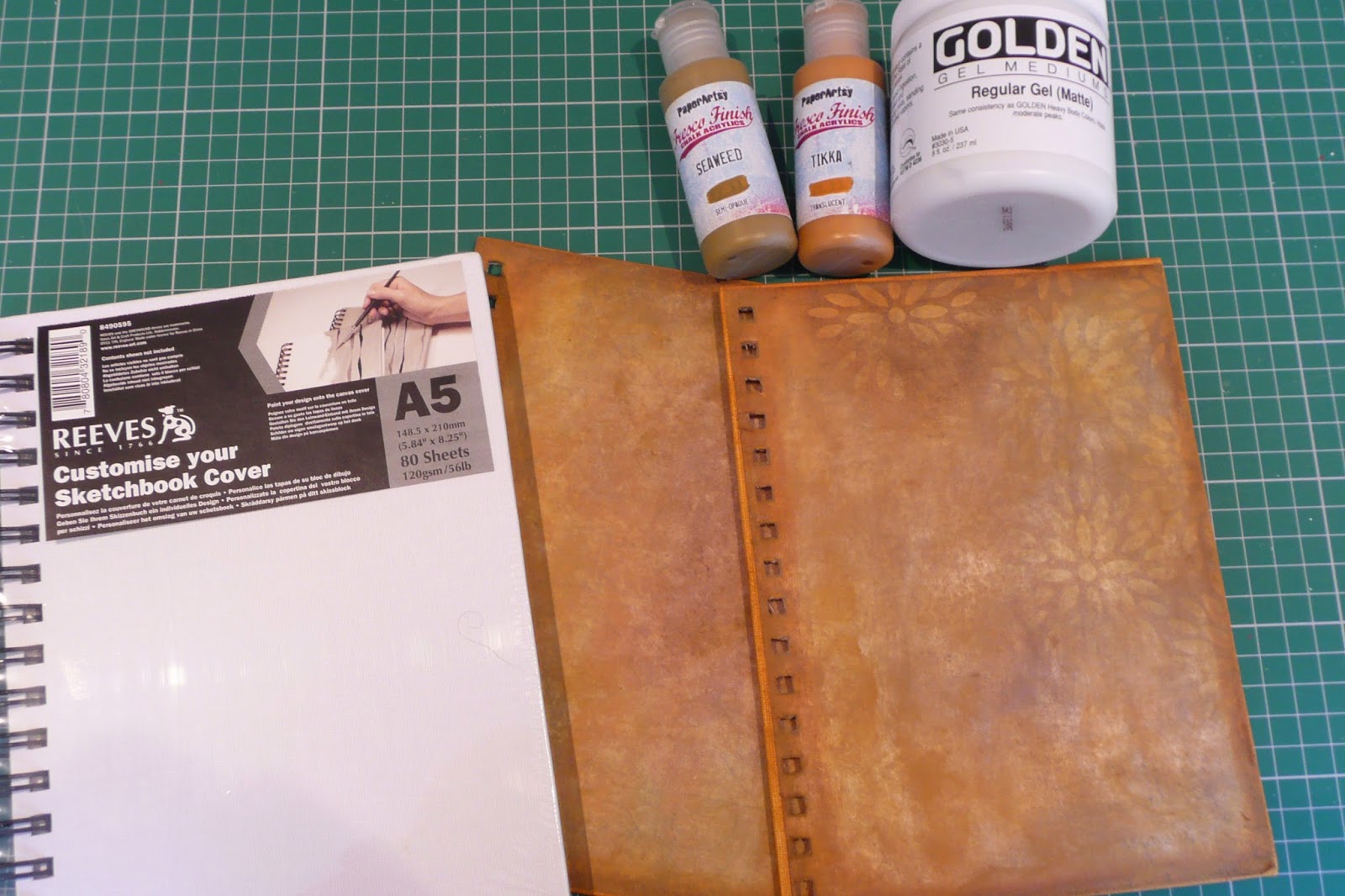 I added some extra stencilling of the flower using the same paint. All the stamps are from Darcy's EDY10, apart from the grasses which are from EDY09. I stamped the bricks to the sides of the cover with a mixture of Caramel, Tikka, and Cinnamon, to give the effect of a walled garden. I stamped the grasses in Marlin and Seaweed, varying the heights and doing some secondary stamping for depth. I stamped the birds at the top right in black Archival and the 'Turn your face to the sun' wording in Marlin (my new favourite colour!). So that was the background done!

Now onto the flower stem. I had prepared various pieces of Chatsworth transferred onto canvas. I stamped the flower stem using black Archival and cut it out, then stamped the individual flower heads onto a different design. I cut these out, distressed the edges with my craft knife, to emphasize the canvas texture, and cut into the petals slightly, and stitched different sized pearls into the centre for a quirky look. I love how you can stitch into the fabric nature of the paper now!

The stem wasn't as green as I wanted so I added a bit of Fibralo pen and blended with a damp brush. I stamped the leaves onto some greeny Chatsworth I had prepared and glued them on just at their bases. I used 3d foam at the base of the flowers so they were decoupaged on top of the layer below. For the Secret Garden wording on the bottom right, I used the stencil PS004 and mixed the Grunge Paste with Marlin. It is such a strong colour that it doesn't dilute too much when mixed with the GP, which I love! Once it was dry, I replaced the stencil and rubbed with Treasure Gold in Emerald. 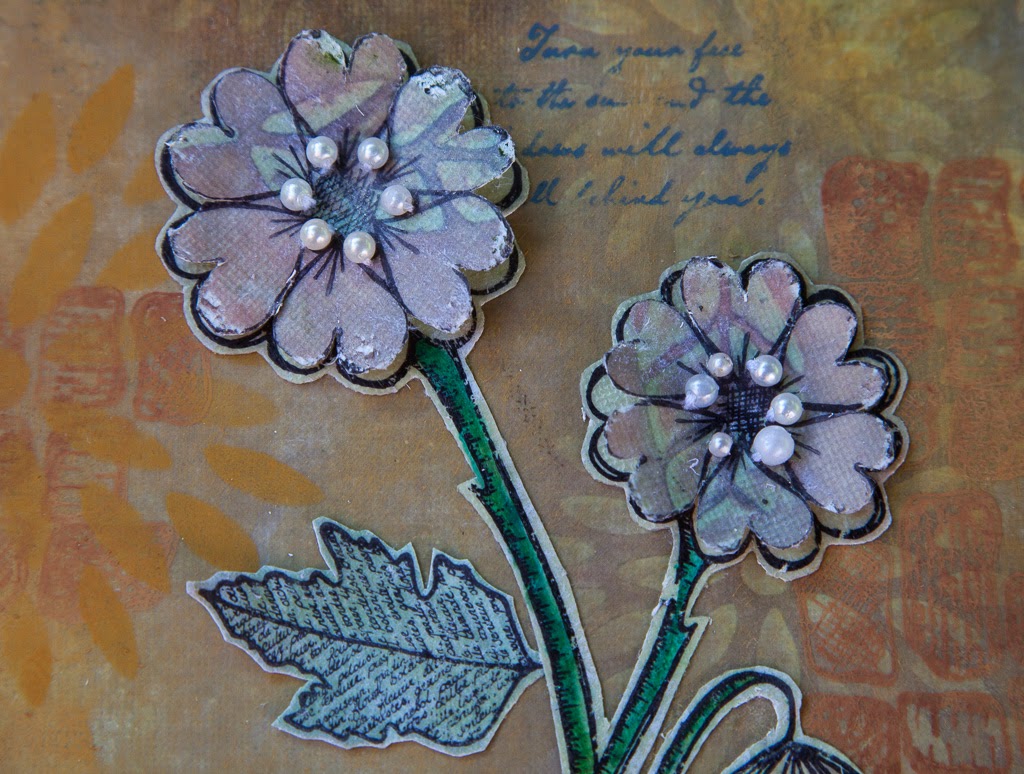 For the canvas, I used one of the chunky 6 x 6 canvases from Paper Artsy and cut a 6 x 6 square of Chatsworth paper. I painted the canvas all over with a mix of Seaweed and Tikka and transferred the piece of Chatsworth to the top using the method I've given over on their blog. I wasn't sure if it would work so well on a less rigid surface but in fact it was just as easy. I used Tikka with a touch of Seaweed at the tips of the flowers through the stencil PS005 down the sides and on the top. 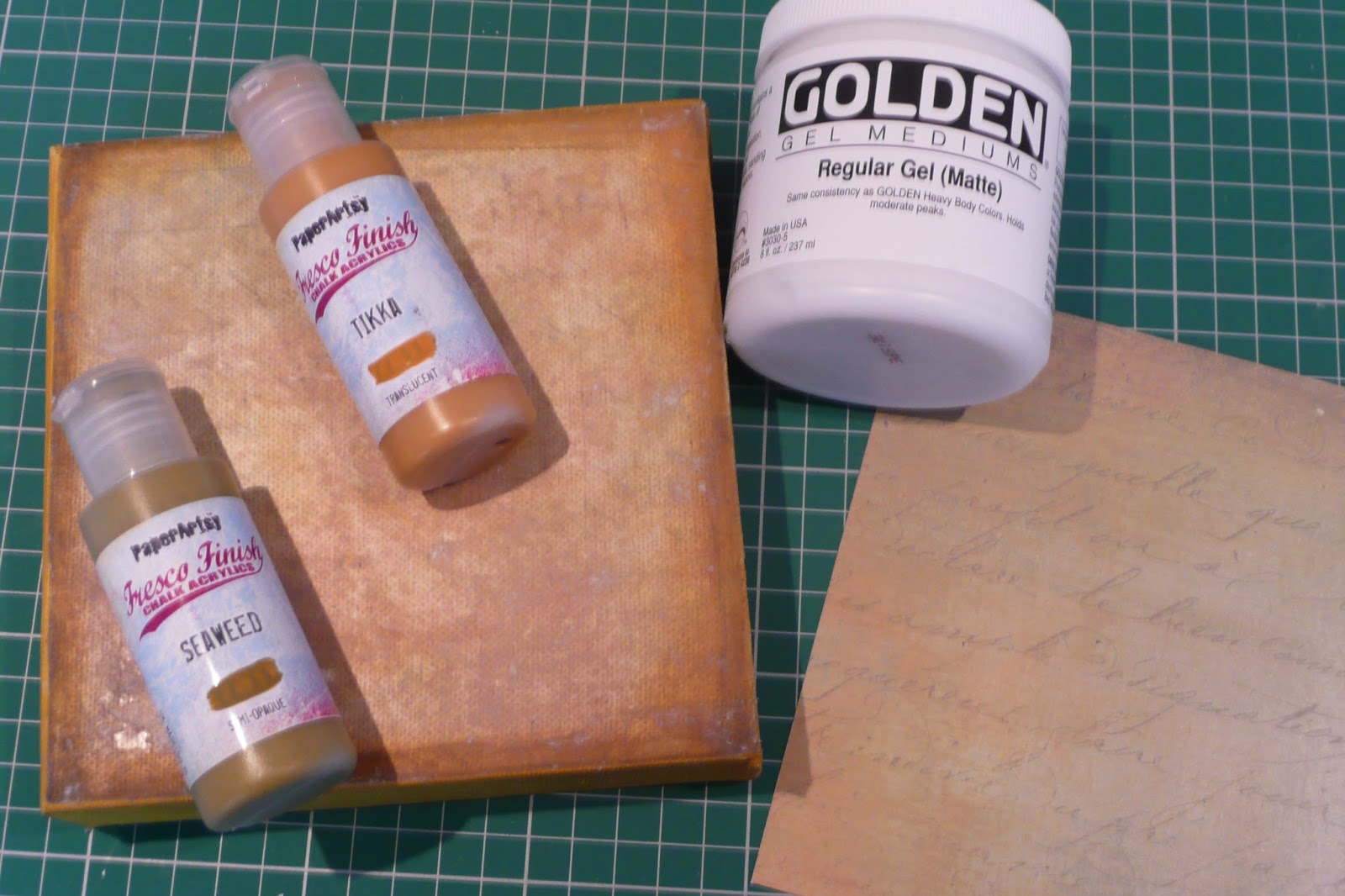 I used Marlin mixed with grungepaste through the Bloom and Grow PS008 stencil and once it was dry, replaced the stencil and used Treasure Gold in Emerald to highlight it. Now for the flowers! I used Darcy's EDY10 and just isolated the largest flower from the stem and black Archival to stamp it onto a selection of Chatsworth designs which I had transferred onto canvas. From then on I followed the method in Leandra's You Tube video here. I left the edges white to emphasize the canvas. I added leaves from the same stamp set, stamped onto green Chatsworth canvas sheet. I finished off with Treasure Gold in White Fire around the edge of the canvas. 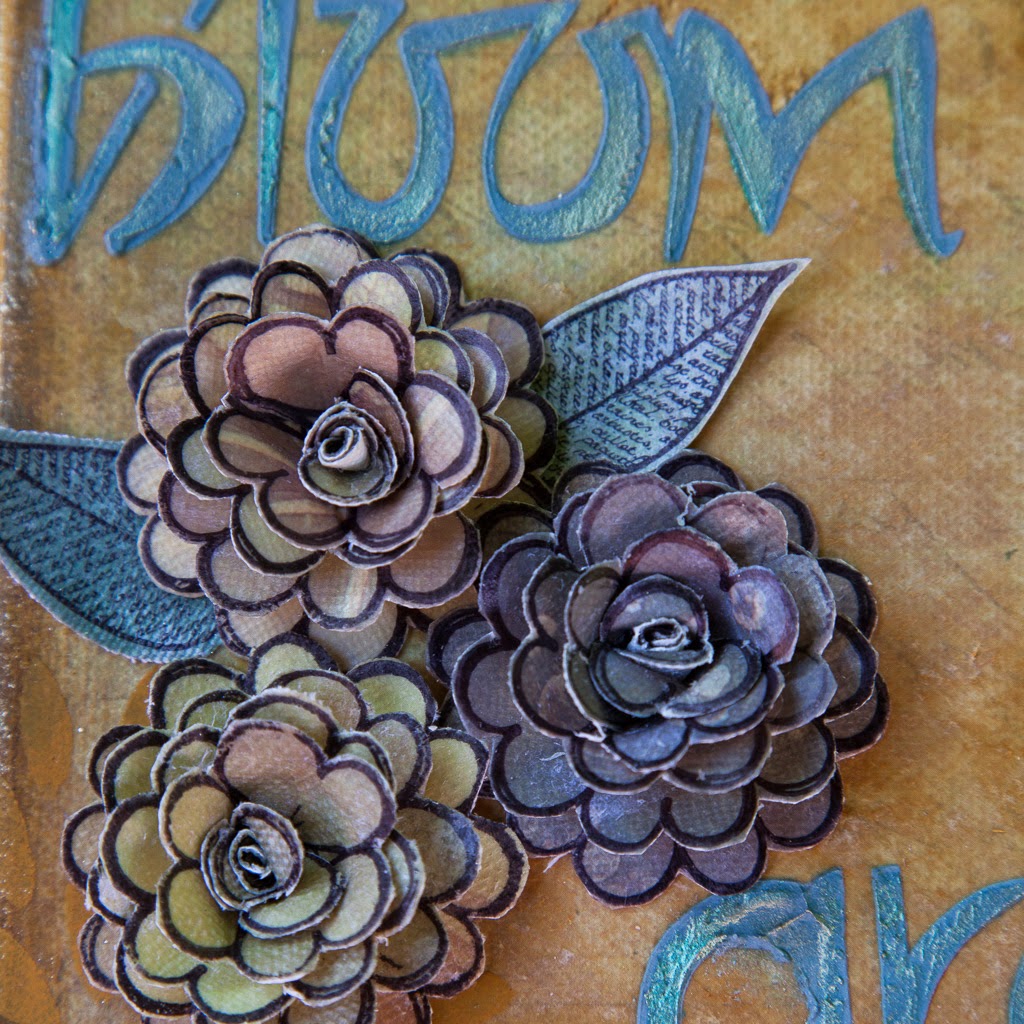 In this photo I have transferred a couple of Chatsworth designs onto canvas on the left, but on the top right I have transferred it onto linen fabric which works just as well. In the middle I have stamped on a piece with black Archival using a Lin Brown stamp set and torn the edges. The bottom right is Thorndon Hall paper transferred onto a canvas board panel which would make a great book cover with a couple of book rings, or put through a Cinch or Bind it All:- 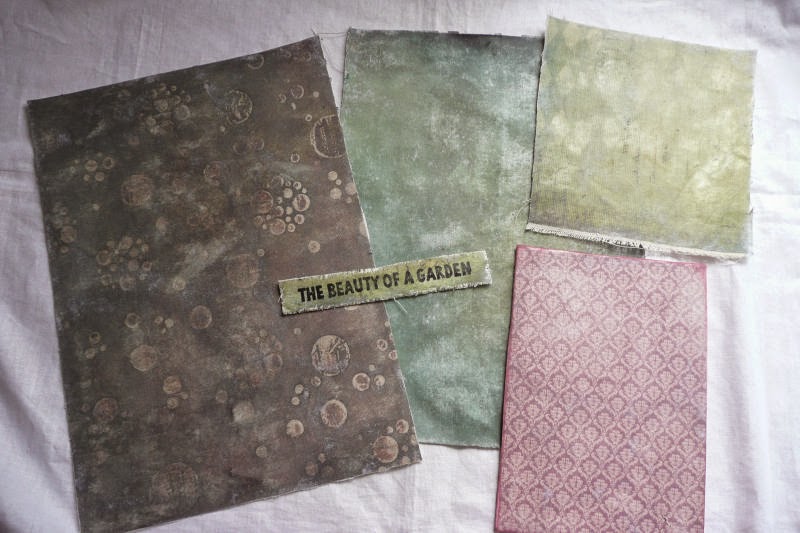 Here are the two final projects:- 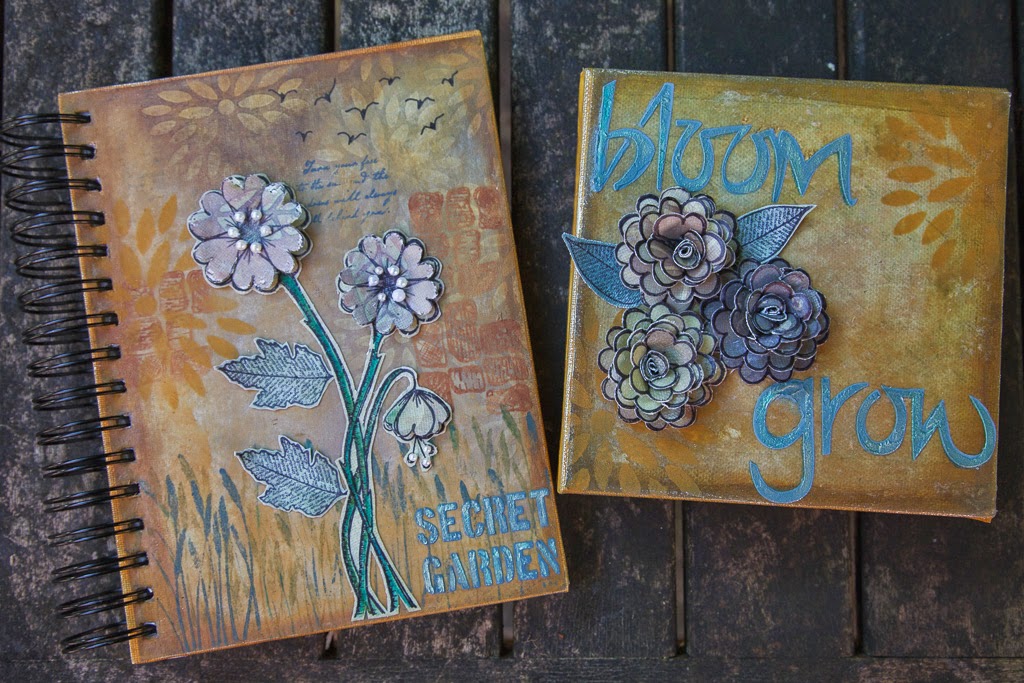 There are so many things you can do with this technique, either transferring designs directly onto a canvas substrate, or preparing pieces of canvas sheet - you can then stitch it, die cut it, stamp on it, stencil on it, mould it around awkward shapes like frames, make a patchwork ....... If you are inspired to make something, there is an amazing prize up for grabs at Paper Artsy this month!
Posted by Lucy Edmondson at 19:00