A Trip to France - And a Fireman's Lift!

Colin and I decided to have a few days in our apartment in Brittany to celebrate his birthday, exactly two years after we made the same fateful trip where we were called back by our neighbour to say there was water cascading through our house and our ceilings were down. What could possibly go wrong this time? I was looking forward to a quiet break having had a nasty bug followed by a stressful time with family worries. When we arrived, very late as a train had been stuck in the channel tunnel, we noticed that the river was very swollen. Our apartment building is a converted mill which used to make the buckwheat flour for the local galettes pancakes, and it sits on a weir. Shortly after our arrival, this was the scene out of our second floor window! 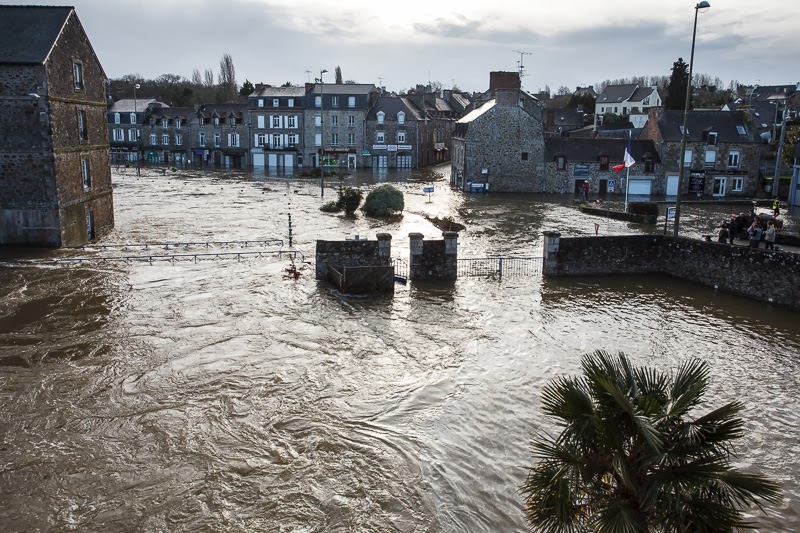 The river had burst its banks and swamped the town. In the photo you can see our car park which is the walled part to the right with the tree and the gates, and the left half of the photo is the river! The wall which normally separates the two has been immersed. Straight ahead in the background you can see the shops and cafes on the main road. Water as far as the eye can see!

This is the main road and the roundabout and our 'corner shop':- 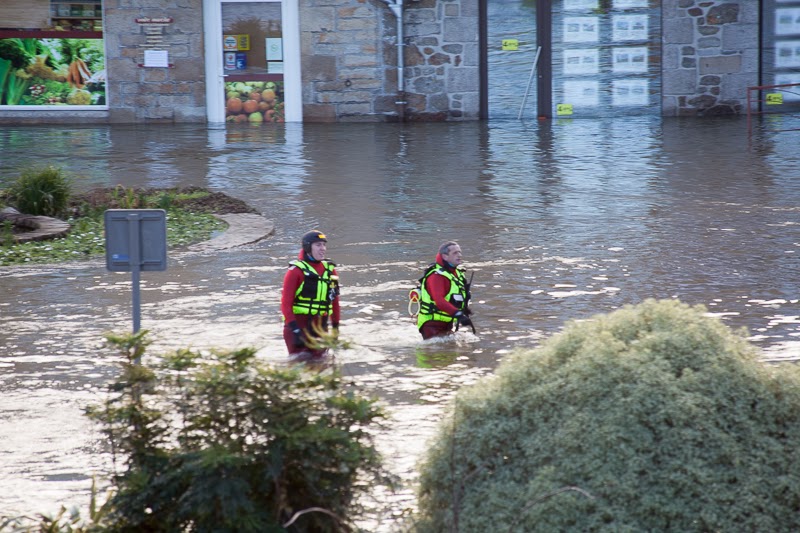 The fireservice sailed a canoe into the lobby and evacuated some of our neighbours with overnight bags as the groundfloor apartments were ruined and we were completely marooned: there was no way out of the building. We wanted to stay and were rummaging through the cupboards to see what dry goods we had to keep us going as, having only just arrived, we had no fresh food. I was planning a batch of tuna pasta when a fireman banged on the door and told us we had no choice, we had to leave now. We slung a couple of things into a bag whilst he stood in the doorway. I'm sorry to say, as it is a less dramatic version of events, that I didn't get to go in the canoe. He took one look at me, and like the fat lady in The Poseidon Adventure, there was a change of plan; we were going out through a window. So I got man-handled by five fireman out of a window onto the bridge and into a waiting van. We were taken to a grim community centre with a row of fifty camp beds set up for the night. Colin took one look at it and planned his escape, but they wouldn't let him leave! I had to act vague and pretend I didn't know where he was. He walked ten kilometres in freezing rain to get our car, which was the other side of the flood water so he had to find somewhere to cross the river, and came back for me.

Some friends kindly put us up for three days until the water levels had dropped sufficiently for us to get back into our apartment. We were so lucky to be on the second floor. A massive clean-up operation started in the town, with civil protection people and the fire service pumping out water and throwing out furniture from all the homes and businesses. I feel so distressed for the many, many people affected who won't be able to return for some time and are now assessing the cost of the damage. What happened to our home two years ago was so traumatic and that was with clean water. The stairwell of the apartments was covered in a greasy slime where the water had picked up oil from the lift mechanism and was very hazardous.

Wherever you are, I hope you are safe from this terrible flooding. My heart goes out to the people whose homes have been devastated.
Posted by Lucy Edmondson at 18:40