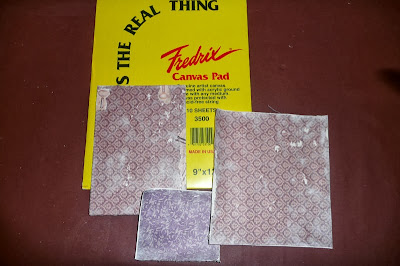 On the Paper Artsy blog this week they have a new Guest Designer, Jo Myhill, and I have had a good mooch around her beautiful work! I have not had much time to play over the last few weeks and have either not joined in the challenges or have done a rushed job. It's been a combination of being in France then being poorly, getting behind with things, and Mum worries. Over the last couple of days I have had a dabble and made a canvas using image transfer which was one of the techniques Jo used in one of her lovely projects. She had transferred a photograph of a flower onto a piece of fabric as a focal point on a canvas. I didn't have anything suitable to use so I decided to transfer some Paper Artsy Thorndon Hall paper onto canvas using the same method Jo described, with Fresco Satin Glaze, finishing off with Gloss Glaze to get rid of the remaining scuzzies and brighten the colours. It's best to use the papers that do not have text as it will reverse it although if it's just for a background and you want a grungy look I don't really think it matters too much personally.

I thought I would do a bit of a comparison between some inexpensive canvas paper I bought on e bay which I stuck down with the Satin Glaze, and some expensive Claudine Hellmuth Sticky Back Canvas which you just stick straight down, which was quicker but I didn't think there was much difference in the results. Above you can see the two Fredrix pieces centre and right, and on the left I have stuck a piece of Thorndon Hall onto a piece of canvas board with Stain Glaze. Below you can see a piece using the Sticky Back Canvas. 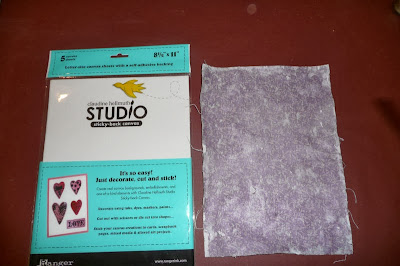 I then prepared my 8 x 8 canvas using Frescos and a daisy stencil and Treasure Gold in Ice Fire. 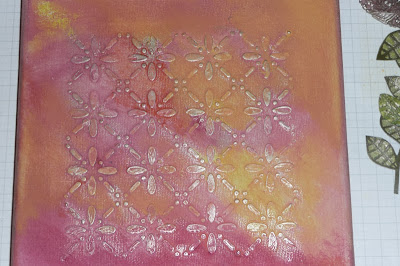 I used a couple of the Fredrix pieces of canvas. I love the texture and feel of them! To get the rough edges I cut a slit then tore them which was really easy. 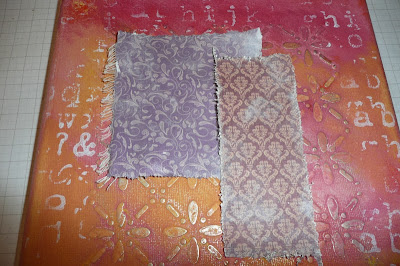 I stamped the Letters and Numbers in Snowflake around the edges. 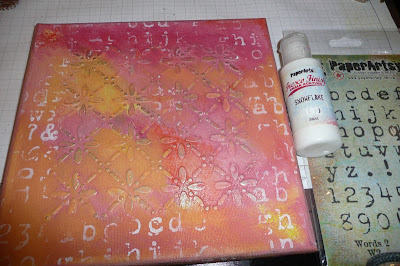 For the leaves I used a stencil with some grunge paste and then cut around the shape it left then highlighted with Treasure Gold in Ice Fire and glued the pieces in place. 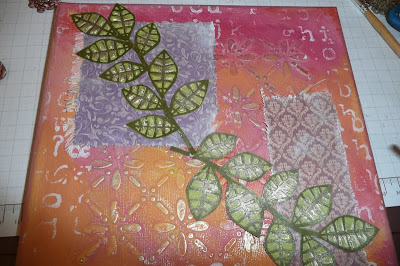 I stamped a selection of flowers on sticky back canvas. I was experimenting so I painted the canvas with Frescos but some I stamped with Frescos and some I stamped with black Archival. I painted the dots in the centre on some and added shading. I cut into the petals quite deeply and roughed up all the edges with my scissors to emphasize the canvas. I backed some onto grungepaper to give them some movement, then I backed some onto packing acetate for the same reason but a cheaper outcome. 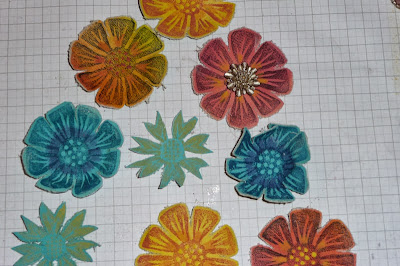 This was another experiment. I bought some of the gorgeous resin embellishments from Leandra at Ally Pally and coloured them with Ice Fire. On the left are some of my own clay embellishments and on the right, the resin ones. I think the resin took the Treasure Gold slightly better. Bearing in mind the cost of moulds, clay, UTEE, etc, I don't think it is worth making them myself as these were such an amazing price and variety. A brush gets into all the grooves. 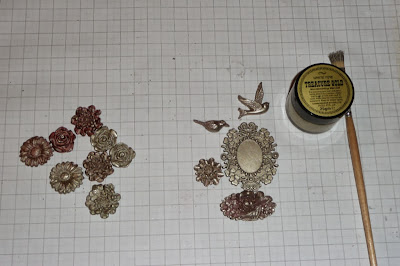 Finally I stamped Garden of Dreams onto a torn piece of the remaining canvas transfer. Again it was easy to tear around the words in a straight line. This is the assembled canvas with the resin flowers in the centre of the canvas flowers. 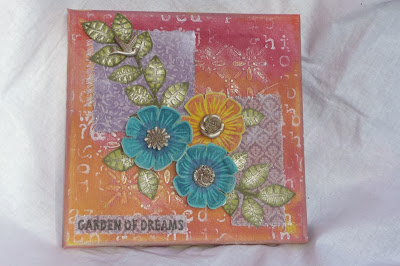 I am entering this into the Paper Artsy challenge which is here. I am quite pleased with this. Not totally, but then I never am. I think it benefitted from spending a bit more time this week on all the individual elements before pulling it together. It's a shame with photos you never quite get the texture as the canvas is so much nicer than plain paper.
Posted by Lucy Edmondson at 22:01