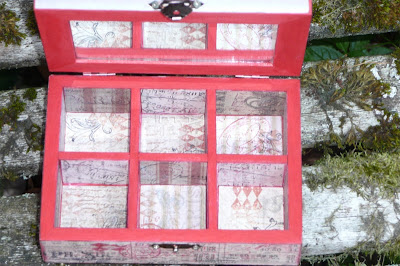 Here's a sneak peek of my final piece for my Guest Designer month over at Eclectic Paperie. It's a little box with tiles on the top made with Tim's Tiny Things stamp set and his French Industrial Papers, both of which I love! It's been such fun doing this guest month, and has really taken my mind off my worries and given me a challenge to focus on. I did make a number of other projects that I either wasn't happy with or gave up on though, so I did have a major wobble along the way. I always enjoy doing a mixture of work for other people, where you are motivated to do your best as you want to represent their company well and justify their faith in you and their generosity, and doing work for yourself where you can have a dabble without any pressure and experiment and maybe teach yourself some new techniques along the way.

So I hope you will pop over to Eclectic Paperie and see me there. Kim, the owner, has been very good to me, and the particularly talented design team she has have been kind enough to leave me thoughtful and sweet comments each time, which has made me feel very welcome.

Last week I didn't tell you too much about the story of the valve gear thingy embellishment on the top left of the tart tin. I thought it had a definite Tim Holtz accoutrements look about it. We've had lots of puddles of DIY stuff sitting around the house over the past year (just realized last week, it's been a year since we returned home from the rented accommodation, and not much progress really). Some of it has been left over from the builders, and some of it things Colin has been working on. There had been a red valve sitting on the window sill in the kitchen for ages and I thought, if no-one claims it, I will have it for a project, so I asked Colin and he went mad! He said, do you realize, that operates the boiler and is really important! He was quite unreasonable. I said I just wanted to stick it on a project. It was so unfair!! So I waited until he had gone out to Tesco and took an impression of it with Mould N Pour and quickly popped it back into the boiler cupboard. I then made a mould out of silver oven bake Fimo, baked it, and painted it red, then glazed it with Fimo glaze. I then chipped some bits off with my craft knife in the same places as the chips on the original. The silver clay underneath wasn't quite metallic enough so I touched it up with a bit of re-inker from my Silver staz-on and a brush. He got back from Tesco and walked into my craft room and spotted it immediately. He's got eyes in the back of his head! He said I told you you couldn't have that! He was very cross. It was so funny! You can't kid a kidder though and he realized very quickly it was a replica. 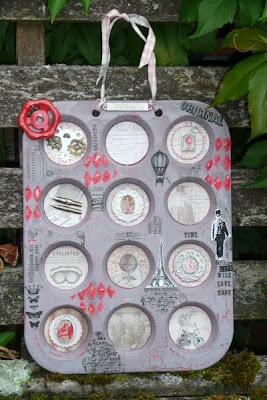 Can you tell them apart:- 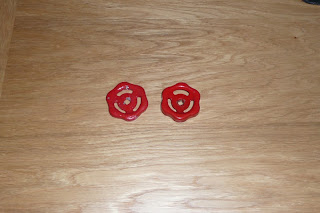 I thought of taking a mould of the Stop-Cock but after burst-pipe events of last year, perhaps that would be a joke too far!
Posted by Lucy Edmondson at 07:24