Over on the Paper Artsy blog I have been doing some experiments using shaving foam. The idea was that, as Fresco Finish paints dry quite quickly, I wanted to see if shaving foam would enable me to do some techniques and act as a way of slowing down the drying time. I've shown three techniques over there, so here I'm sharing how I made the example project, which is an 8 x8 canvas with a mini canvas. You can, of course, do exactly the same process on cardstock to create a masterboard to cut up and make cards, etc. The shaving foam is an incredibly quick way to make backgrounds and it makes the paint go a long way. 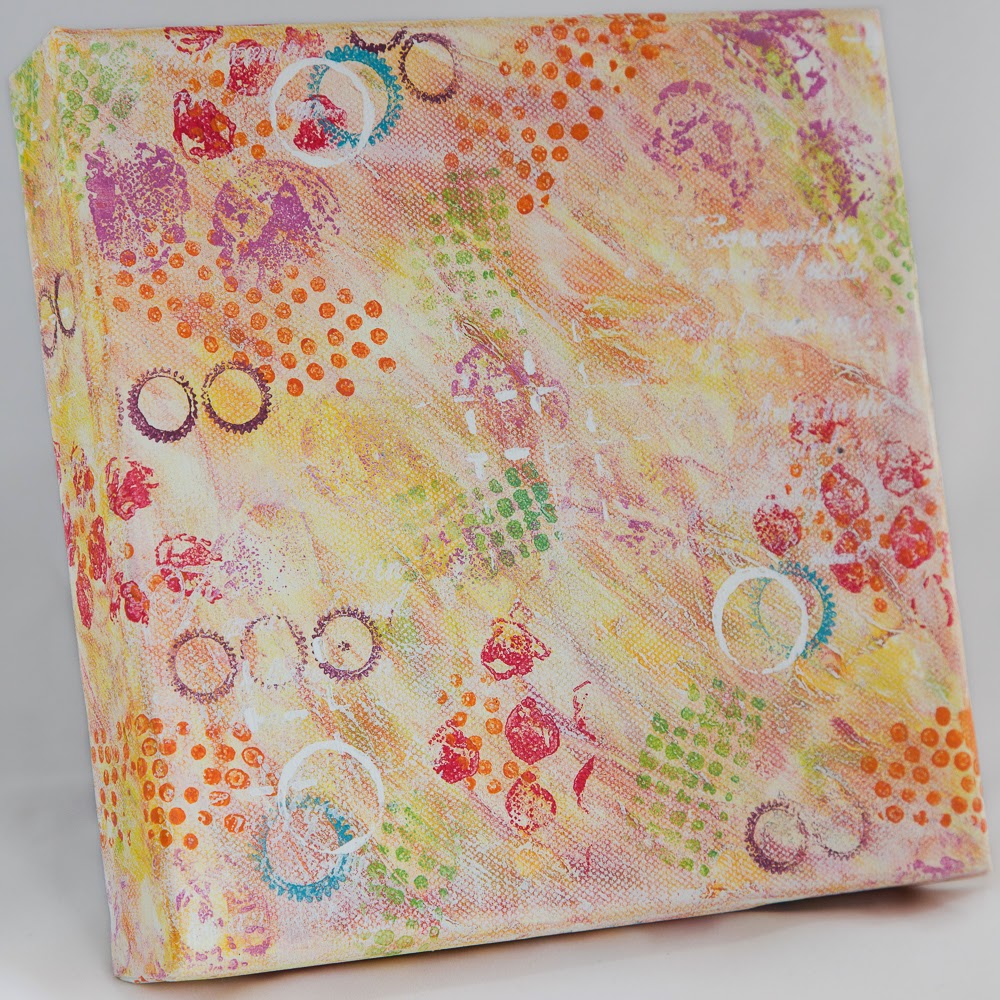 Once I'd got to the stage of adding the shaving foam and Frescos to the canvas with the credit card it looked like this:- 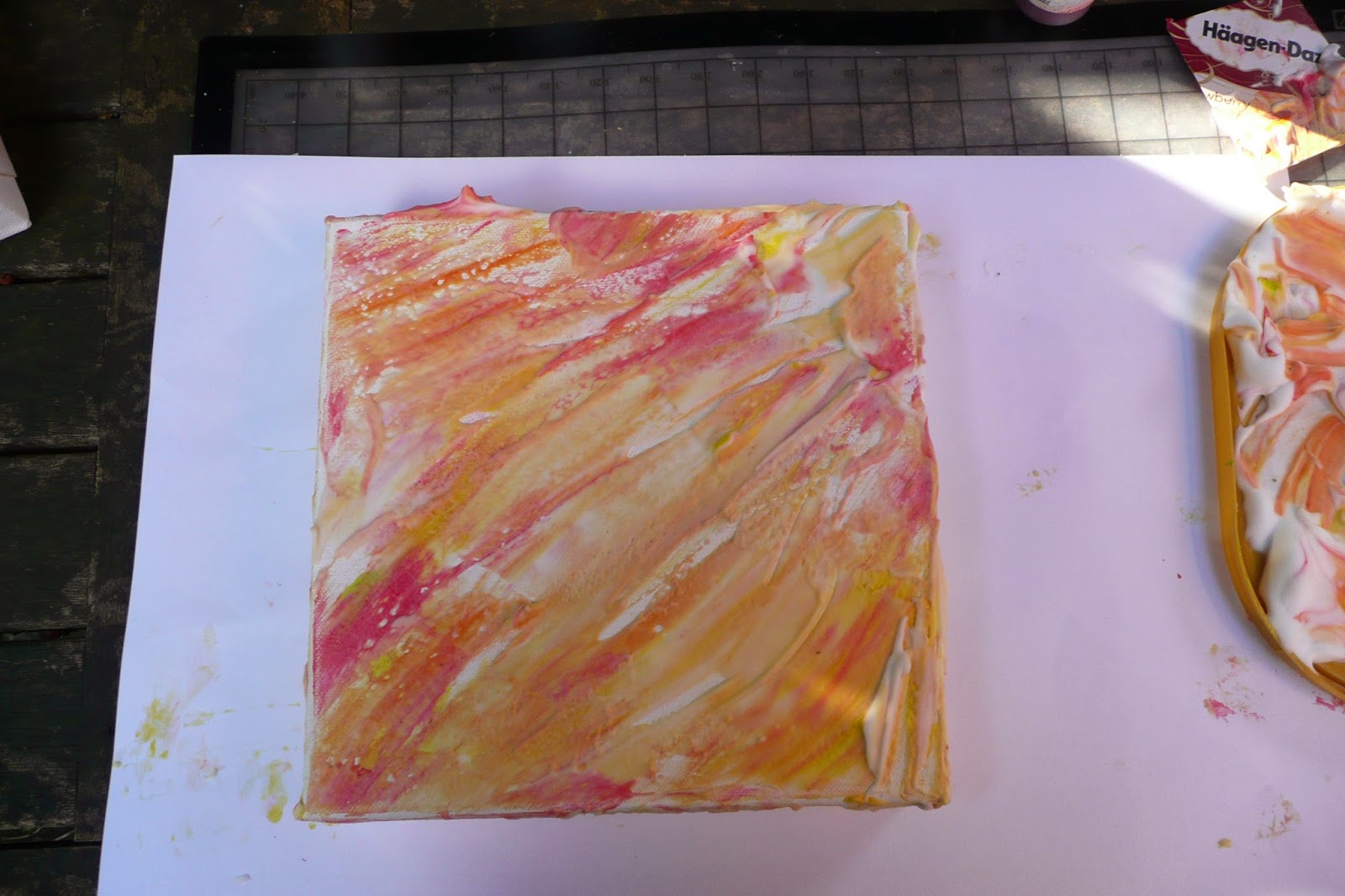 After drying, I dry-brushed some Snowflake so that I had a paler layer for my stamping. It was interesting how the canvas texture picked up the brush strokes. I did left to right then right to left and then rotated it and did the same again. Then I prepared my flowers from Ellen Vargo EEV10. I love this set. At the end of the project I completely changed my mind about what was going to work as I had intended to have all three flower heads, each on a mini canvas, arranged around my larger canvas with a phrase broken up into words. Once I had finished stamping up my background, however, I didn't want to cover it, since it was the purpose of the exercise. Unfortunately though, that's the problem with step by step photos, you can't take them again if you change your mind at the end, so I will show you all three flowers!

I used cut n dry foam to apply Tango, and Yellow Submarine to the stamp, using Haystack to make them a bit more opaque and graduating them along the flower head, and then Turquoise with a touch of Evergreen to darken it for the stem as I wanted to stick to the same colour palette as for the canvas. Whether that was the right thing to do or not I don't know. I stamped onto Smoothy Heavy Weight cardstock. 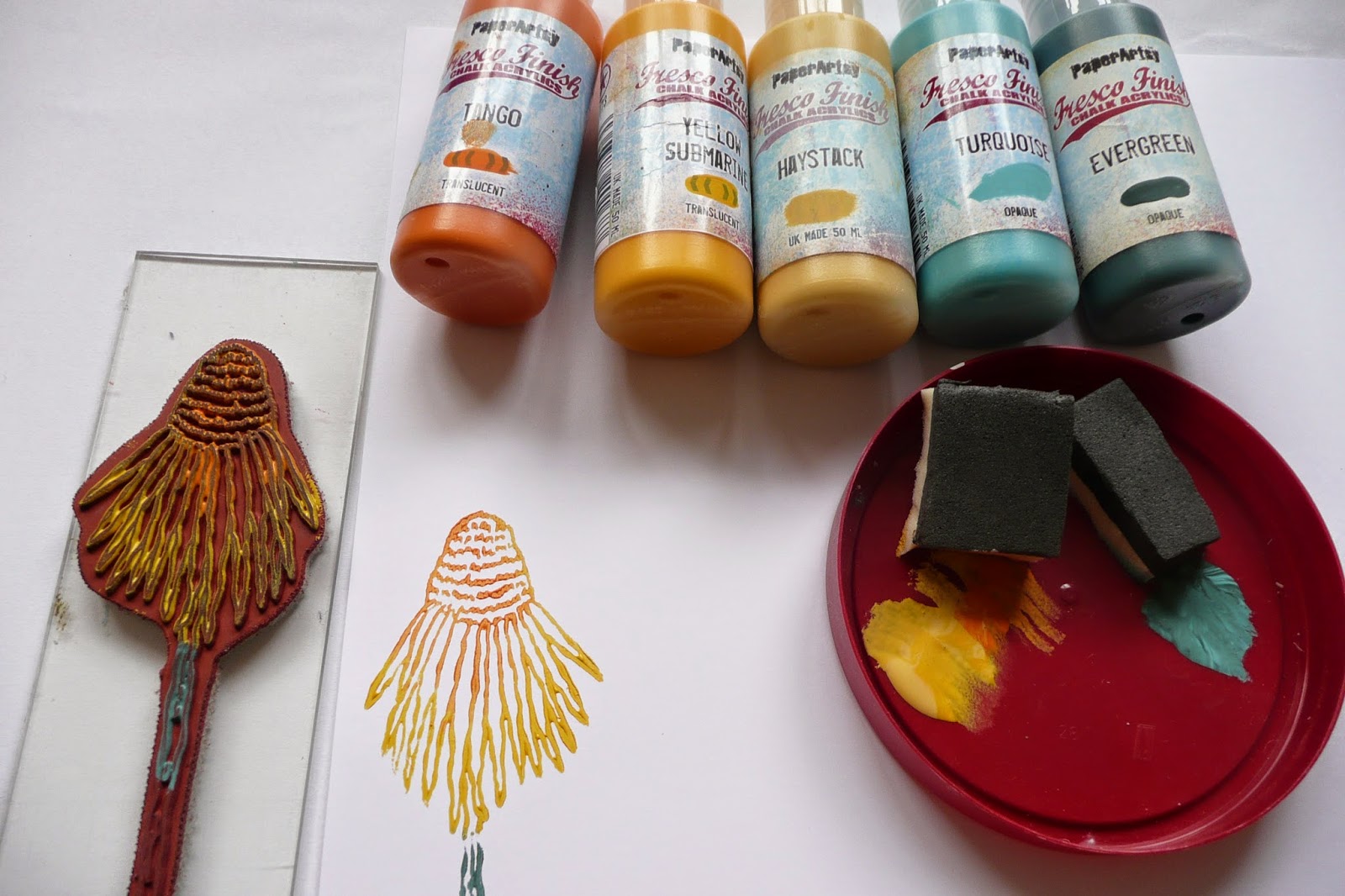 For the flowers at the top I added some Plum and for the Tulips on the right, I added Cherry Red.
I hadn't intended to paint the flowers so I did some major dithering and then decided as I had stamped a whole page I could at least paint one of each and then decide. I painted with the same colours, adding Tango, Zesty Zing, Cherry Red, and Plum, to the ones at the bottom, and then fussy cut them and touched up the edges. Well, I've got loads for another project now! 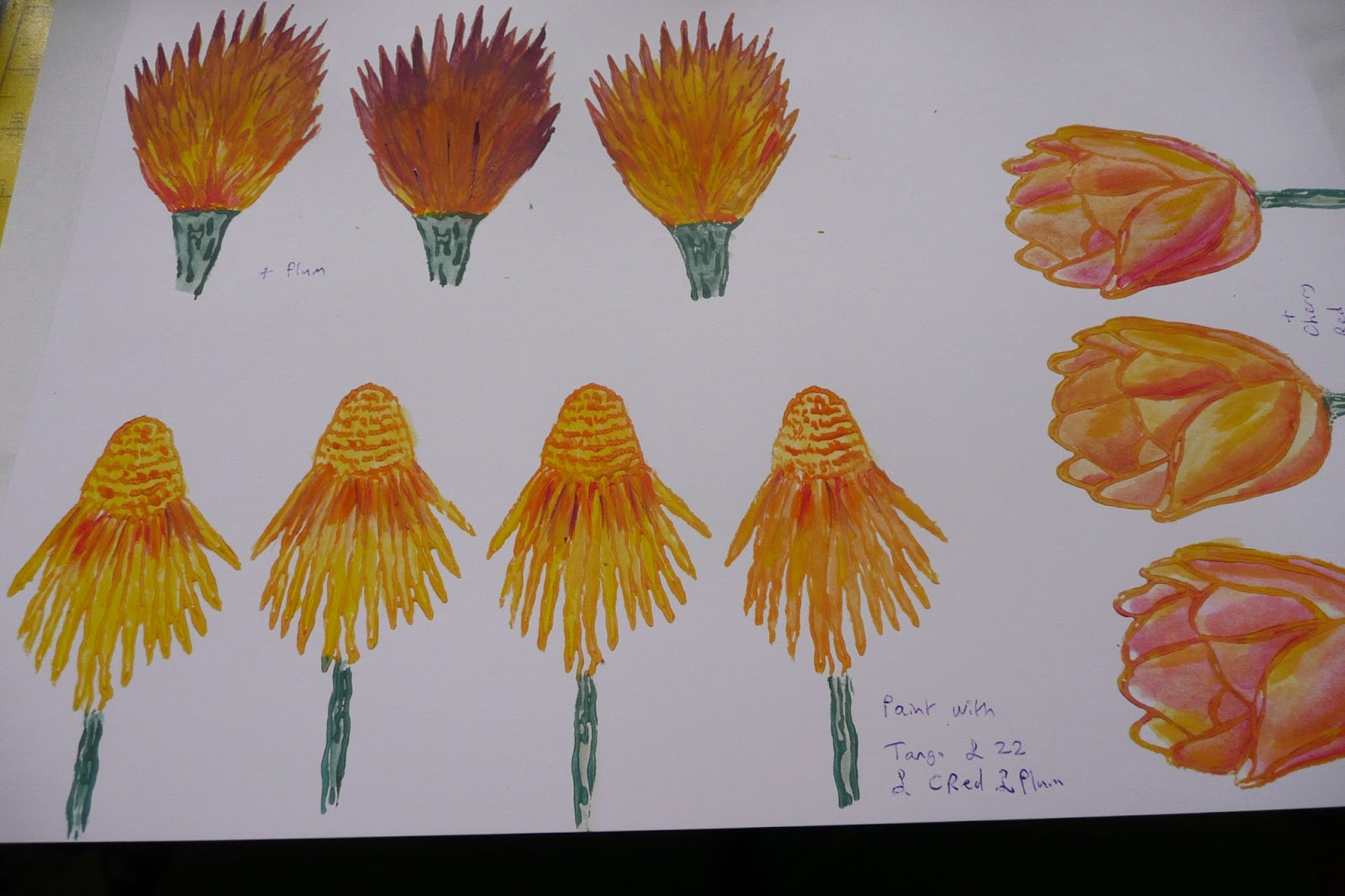 After I had cut out the flower heads I realized they were too big for the mini canvases I had, so I rushed into town, covered in paint, and bought some larger ones. I was holding my breath as I walked into the shop that they would have them! I bought ten just in case I messed up! I used my shaving foam technique but in different shades to the main canvas but the flowers still didn't seem to contrast enough on the background, so I kept adding white, then more colour, then more white, then edging them with colour. Then the three larger sized mini canvases were too big really for an 8 x 8 canvas, and if I had realized, I could have used one of the Paper Artsy 10 x 10 canvases in the first place. So all in all, I had a right old dither, just because I decided I wanted a dimensional project rather than showing you a simple masterboard. Showing off, huh?!

The next bit was really straight forward. I used EEV06 and the same colour paints as I used with the shaving foam, to build up the background, applying the paint with cut n dry foam. I found it easier to get even pressure on the canvas without a block, and I pressed a stamp near the edge and then carefully bent it so it continued down the side as shown. I used one of the paint tops with Snowflake to overlap the circular images. There's such a lot on this stamp set! You can just about see top right in this picture, although it eventually gets covered by the mini canvas, that I stamped the William Blake quote from Lin Brown LP05 in Snowflake as I wanted a bit of text, and in the centre I've used a catalyst to make a sort of grid pattern. 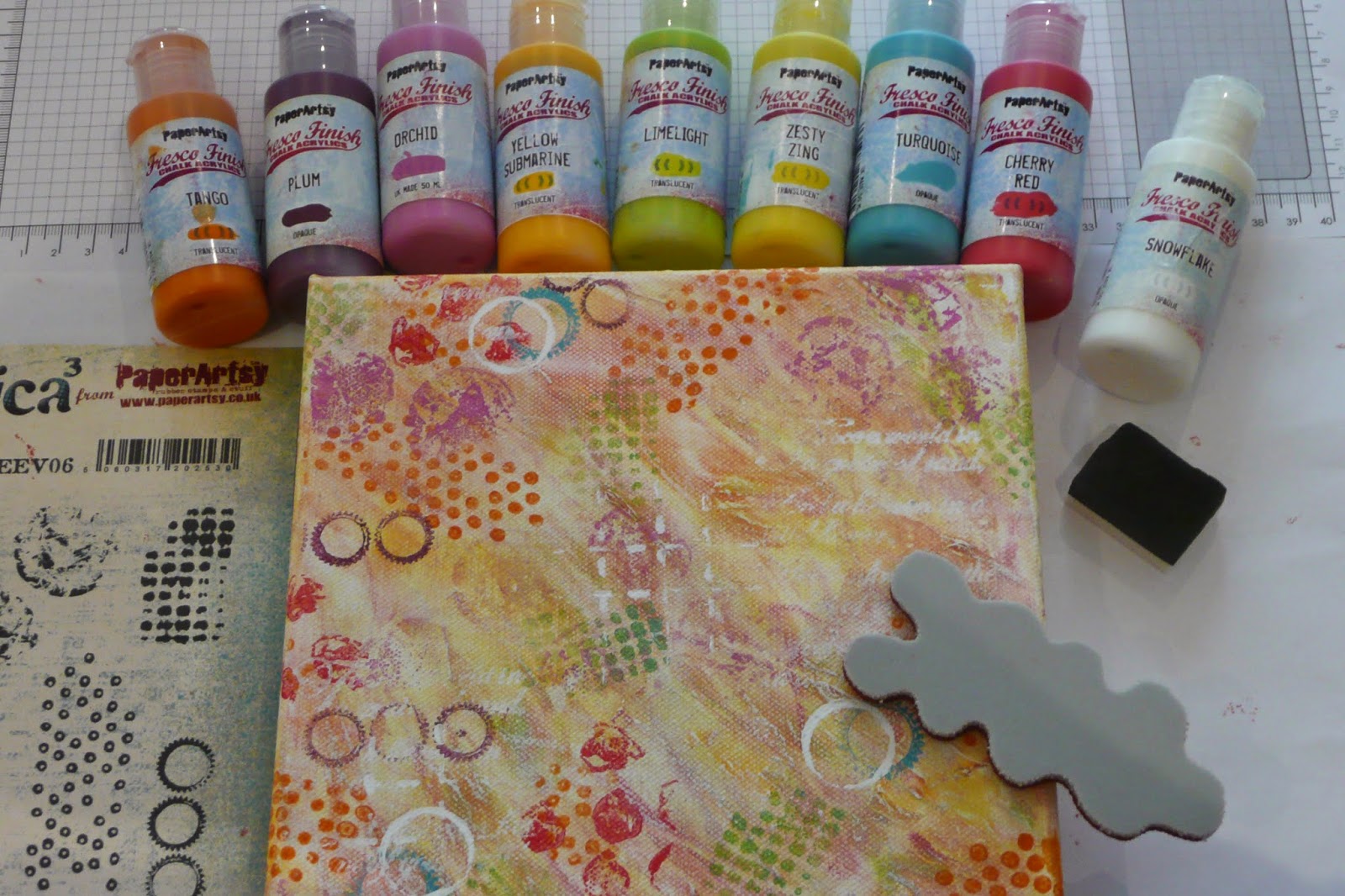 So that was the background done, and I'd decided just to have one mini canvas and had to decide which bloom to use, so I went for the Tulip as it's such an iconic 'stand alone' flower. I had all those prepared mini canvases in greeny shades, with the other seven spares, and Mr Less is More got involved. 'Why does it have to be painted at all?', he said. 'I can't just shove it on there, straight out of the packet', I replied. But I had to agree it did set things off rather well. So we compromised with a dose of Chalk.

I stamped the words 'Flowers Whisper' from LB05 in Plum Fresco onto a sheet of canvas, isolating the words with some masking tape. I then tore around them. I didn't use the whole phrase as I didn't want to cover up too much of the background, so again, a major dither. 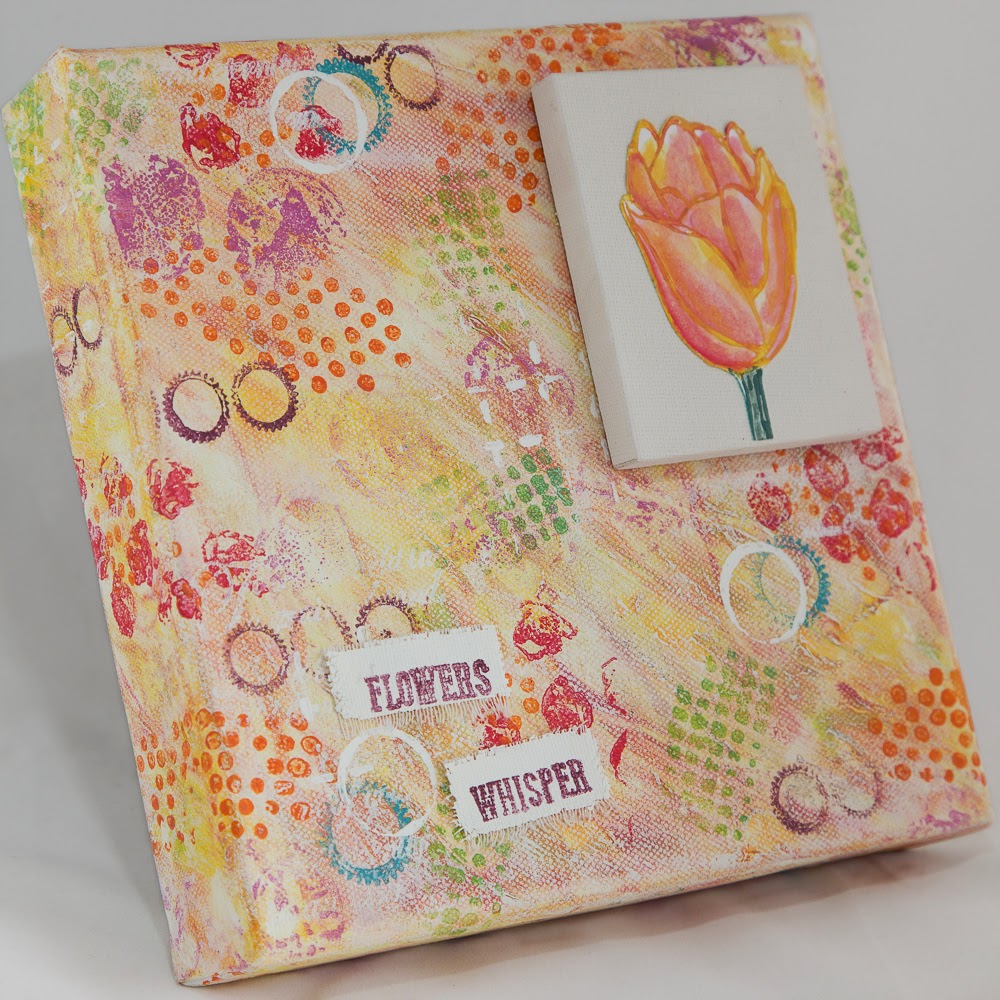 The shaving foam techniques I've shown on the Paper Artsy blog are great fun and very cheap and cheerful and there's no need to dither about as I have with my canvas project, so I hope you will give them a go so that you can enter the prize draw! And to the people stood behind me when I was buying the canvases, yes I do wash my hands sometimes!